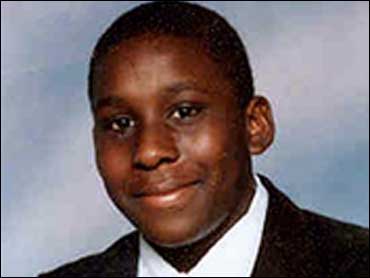 A black teenager who was followed through a park by a group of men shouting racist taunts died Saturday after an attacker embedded an ax in his skull.

Anthony Walker, 18, was waiting for a bus with his girlfriend and a cousin when a man started shouting racist taunts at them late Friday near Walker's home in Liverpool, police said.

The three left to find another bus stop to avoid any trouble, police said. But a group of three or four men followed them through a park, and Walker's companions saw someone bludgeon him with an ax.

They ran to get help and returned a few minutes later to find him with the ax embedded in his skull, news reports said. Walker died early Saturday.

No arrests had been made in the attack.

"What we are dealing with here is a vicious and unprovoked attack on a young black man which we believe to be racially motivated," said Detective Chief Superintendent Peter Currie, who was leading the investigation.

Police said several other incidents of racial abuse had been reported in the area recently.