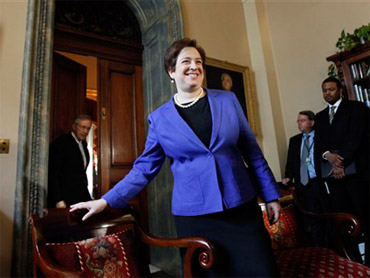 U.S. Supreme Court nominee Elena Kagan's review of the book "A Confirmation Mess" is creating a confirmation mess of its own.

Kagan's 1995 commentary on Stephen Carter's book rendered a harsh judgment on how lawmakers question Supreme Court nominees, and that has some senators preparing to interrogate her about it.

"I talked to her about that essay," said Sen. Patrick Leahy, a Vermont Democrat and chairman of the Senate Judiciary Committee. "She said, 'I think I'm probably going to hear that quoted back to me a few times during the hearing.'

It will make for some uncomfortable moments for Kagan during her confirmation hearings, scheduled to begin June 28. When she wrote her article in the University of Chicago Law Review, she had just had an up-close view of the confirmation process as a Judiciary Committee staffer during Justice Ruth Bader Ginsburg's confirmation hearings.

Kagan left no doubt what she thought about the Senate's subsequent treatment of Supreme Court nominees.

"If the recent hearings lacked acrimony, they also lacked seriousness and substance."

"The practice of substantive inquiry has suffered a precipitous fall since the Bork hearings, so much so that today it hardly deserves the title 'practice' at all."

"When the Senate ceases to engage nominees in meaningful discussion of legal issues, the confirmation process takes on an air of vacuity and farce, and the Senate becomes incapable of either properly evaluating nominees or appropriately educating the public."

"Senators today do not insist that any nominee reveal what kind of Justice she would make, by disclosing her views on important legal issues. Senators have not done so since the hearings on the nomination of Judge Bork. They instead engage in a peculiar ritual dance, in which they propound their own views on constitutional law, but neither hope nor expect the nominee to respond in like manner."

Kagan even had mild criticism for the confirmation testimony of three of the justices she now wants to work with: Ginsburg, Stephen Breyer and Clarence Thomas.

Of Ginsburg's and Breyer's testimony before the Judiciary Committee, she wrote, "Most of the testimony disclosed only the insignificant and the obvious did anyone need to hear on no less than three separate occasions that Justice Ginsburg disagreed with Dred Scott?" Kagan was referring to the case in which the court ruled that slaves were not citizens.

"The Senate also confirmed the nomination of Justice Thomas after his substantive testimony had become a national laughingstock," Kagan wrote.

Kagan did note that Ginsburg and Breyer "were playing the game in full accordance with a set of rules that others had established before them. ... And finally, I suspect that both appreciated that, for them (as for most), the safest and surest route to the prize lay in alternating platitudinous statement and judicious silence."

Now, Kagan has to decide whether she will use the same tactics she derided when she appears at her own hearing.

Sen. Dianne Feinstein, a Democrat from California, said she brought up Kagan's criticisms of her predecessors' testimony during a private visit in the senator's office. "What I said is, 'I trust you are going to be a paragon of exactly the opposite of what you wrote about,"' which Feinstein said brought laughs from both women.

Kagan already has started backing away from her own statements. During her confirmation for her solicitor general job last year, she said she sees things differently now that she's older, no longer on the Senate staff and most importantly someone who herself faces confirmation.

"I wrote that when I was in a position of sitting where the staff is now sitting, and feeling a little bit frustrated ... that I really wasn't understanding completely what the judicial nominee in front of me meant, and what she thought," Kagan said in her 2009 hearing.

Sen. Richard Durbin from Illinois, the Senate's No. 2 Democrat and a member of the Judiciary Committee, said he reminded Kagan on her recent visit to his office, "You know, you're going to have to live by the Kagan standard, which you established."

He said the Supreme Court nominee replied, "Well, the world looks a little different from this vantage point."

That doesn't matter to some senators.

Republican Sen. James Inhofe, from Oklahoma, announced his opposition to Kagan on the same day she was nominated, saying he was "concerned about the seeming contempt she has demonstrated in her comments about the Senate confirmation process."