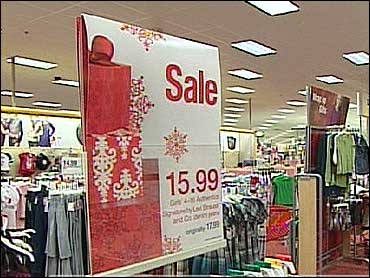 By now, most people have made out their holiday shopping lists and checked it twice, in order to budget how much they spend this season.

However, even the most strategically-planned holiday budgets can come undone if you fall for the many tactics companies are using to get you to spend more.

On "The Early Show" Tuesday, financial contributor Vera Gibbons spotlighted those techniques, and told how to keep from falling prey to them:

Each of the "tricks" can put you deeper in a leftover financail hole. Some 13.5 million Americans are still paying off last year's holiday debt.

See our big Holiday Gift Guide
Phony Sales: Stores know they're up against a very cautious consumer, and that the only way to get them in there is to emphasize deals! But some of these deals aren't deals at all.

Surveys show some two-thirds of consumers plan to spend less on holiday gifts this season, so retailers' sneaky sales and pricing tactics are more prevalent than ever. Many are creating a sense of urgency with pushes such as, "But two, get one free" or "One-day only sale" (which inadvertently turn into five-day sales). Also: 10 for $10," and advertising unrealistically low prices on various items just to get you in! Once you get there, the product you came in for is on back order, and you end up buying all sorts of other things! Also -- when it comes to electronics, low prices don't necessarily mean good deals. For example: TVs advertised at low prices are seldom the ones getting the best reviews. You have to comparison shop.

The Store Charge Card: One of the biggest "gotchas."

You get the pitch when you get to the counter: Save an ten, twenty percent on your purchase sy signing up on the spot for a store card. They're easy to get -- easier than credit cards, for instance -- but if you don't pay your balances off every month -- and about 50-60 percent of Americans dont -- you should resist the offer. The interest rates are high, usually topping 20 percent. For example: The Macys store card rate is 24.5 percent. The national average for credit cards is under 13 percent, so that's almost twice as high!

Paying with cash is a better way to go. More people are this holiday season! In fact, nearly 72 percent of consumers are using cash, checks or debit cards this year. It's the only foolproof way to keep spending under control; studies show we spend 12-18 percent less when we pay with cash -- there's an emotional attachment to it!

We're expected to spend $1.2 billion on extended warranties for electronics and appliances this holiday season. They're pushed on us because they're a moneymaker: Retailers pocket half or more of what they charge for them (much more than they make selling the actual product!). You should just say "no." You don't need it! Not only are some repairs already covered by the standard manufacturer warranty (which covers parts for one year and labor for 90 days), but Consumer Reports surveys show most products don't break within the period the extended warranty covers. And when -- and if -- they do break, the repair cost is about the same as the extended warranty! You're better off just paying for repairs outside the warrantee period out of your own pocket. But if you insist on additional peace of mind, and you've bought that big ticket item with your credit card, find out if the credit card company issuer offers any warranty protection; in some cases, they'll double the standard warranty period at no extra cost to you.

Digital cameras, camcorders, computers printers, PDASs, GPS devices -- all are subject to 15-25 percent restocking fees (percentage of the purchase price) if you return them at lmany stores, and they're not in their original packaging. Retailers don't want you to "buy" something only to use it on vacation and then return it, so they're cracking down on that, because they can't resell any item as new after the box has been opened. Consumers -- don't open the package if you don't want what's inside!

Retailers have different return policies. And they may be different for items bought in stores, through their Web sites, by mail order, etc. For exmaple: Kohl's doesn't accept returns by mail if the merchandise was purchased in a store. Other stores have similar policies, and some of them have gotten complicated! On certain products, you may only have 14-day window in which to make return. And while you might have a full 90 days at Home Depot, for instance, to make a return, the company "reserves the right to limit or refuse returns at any time for any reason." Bottom line: Know what you're up against; it's best to have receipts, as well, or you could be out of luck.