When was the last time you boarded a flight and thought about how much sleep your pilot had? Or how much training the air-traffic controller had? Or where the airplane got its last tune-up? Those are just some of the thoughts that keep one former accident investigator awake at night.

"I think right now, aviation safety is average. Probably a C-plus rating in my book because in some parts, it excels," said former National Transportation Safety Board investigatorGreg Feith. "But in others, it's in a 'D' or even an 'F' category."

CBS News Travel Editor Peter Greenberg reports this is one report card where an "F" could mean fatal, as it did nearly one year ago when Continental Connection Flight 3407 experienced an aerodynamic stall, and crashed,killing 49 people on board, and one on the ground.

Statistically, the United States is currently enjoying its safest era in aviation history. Over 26,000 flights take off and land without incident every day. The number of serious runway incursions involving commercial airliners has dropped by more than 63 percent, and last year's crash in Buffalo was the first fatal accident in more than two years.

But here are some other numbers: since Sept. 11, 2001, 33 airlines have declared bankruptcy. In the last two years, 8,500 pilots lost their jobs. Throw in soaring fuel costs, and a global recession, and you've got an industry that's flying at margins.

FAA Report on "Call to Action" for Airline Safety

In 2009, this industry lost between $3 billion and $5 billion," said James C. May,CEO of the Air Transport Association of America.

These financially-strapped carriers are slow to replace an aging fleet -- some are flying planes more than 15 years old.

"I think aviation safety is falling victim more and more to the almighty dollar," Feith said.

The problems are easy to identify, and there are a lot of them.

National Transportation Safety Board Chairman Debbie Hersman said "Right now, we have about 500 open recommendations to the FAA."

Hersman says some of the items on the NTSB's "Most Wanted List"of air safety improvements date all the way back to 1990. But the Federal Aviation Administration has yet to implement them.

"We have some oldies but goodies on our most wanted list," Hersman said.

"Under the aviation list, every single one on your list is coded red. What does red mean," Greenberg asked.

"Red means that the progress they're making is not satisfactory to us," Hersman replied.

Pilot fatigue is one of them. The NTSB says it's been a factor in at least 300 airline accident deaths over the last 16 years.

Fatigue in the control tower is another concern. Even though airlines have cut flights by roughly 16 percent, there are also 1,000 fewer air traffic controllers than there were in 2002 - the lowest level in 16 years.

"Our busiest facilities in the country are well below their comfort level," said Paul Rinaldi, President,National Air Traffic Controllers Association..

He says an effort to manage more than 5,000 flights in the skies at any one time, many air traffic trainees are learning on the job.

"The analogy we like to use is, we're taking high school pitchers and putting them in Yankee Stadium to throw a no-hitter," Rinaldi said.

Speaking of the minor leagues, a recent government study of nine commercial airlines revealed that in 2007, of the roughly 1200 major maintenance checks performed on planes, over 70 percent were outsourced. More than 200 of them were done at foreign repair stations. 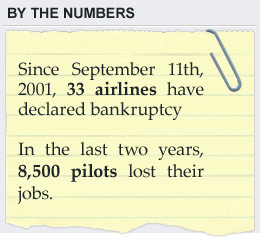 (CBS)
Who's flying those planes? Pilots like "Miracle on the Hudson" First Officer, Jeff Skiles.

"The people doing the maintenance are completely unlicensed. They hold no accreditation from the FAA," Skiles said.

Perhaps worse, not enough federal inspectors to thoroughly and frequently check that work.

"We now have to move forward and say what can we do for future families to prevent them from going through the tragedy we have," said Scott Maurer. His daughter Lorin perished in the crash of Continental 3407 one year ago. Since then, he's been to Capitol Hill 15 times to advocate for air safety.

The families of flight 3407 are working on solutions. They're proposing legislation that would revise flight and duty times for pilots, improve the level of pilot training - especially in adverse weather conditions - and increase the minimum amount of flight experience from 250 hours to 1500 hours at regional carriers.

"The FAA has to speed up its process, said Sen. Chuck Schumer (D-NY) "It's slow-walked everything."

The FAA declined our request for an interview, but said it does plan to propose new regulations for pilot fatigue and training this spring.

CBS News also tried -- unsuccessfully -- to talk with the CEO's of 4 major legacy airlines. Their chief lobbyist, Jim May had this to say. "Our guys can cut costs with the best of them. They have to learn how to do that to survive," he said. "But that isn't the case when it comes to safety and security."

Historically, when the NTSB has made urgent recommendations, the airlines have often lobbied to block, or delay them -- claiming "severe economic impact."

Debbie Hersman worries that as the economy languishes, so will her wish list.

"When we lose 50 people in an aviation accident that might have been prevented had previous recommendations been implemented, I ask you if you can face the families and tell them that the cost-benefit didn't make sense," Hersman sain. "Because I surely can't."

Hersman is frustrated that continued inaction will cost more lives.

"It's somewhat of a tombstone mentality. We have to, unfortunately, kill more people in order for us to get our recommendations adopted and that's a tragedy."

More From USA Today
Has USA hit the Final Frontier in Human Space Exploration?
Outlook for job market remains grim
Recession scars will linger long after economy heals
A closer look at the U.S. in the next decade
In America's next decade, change and challenges