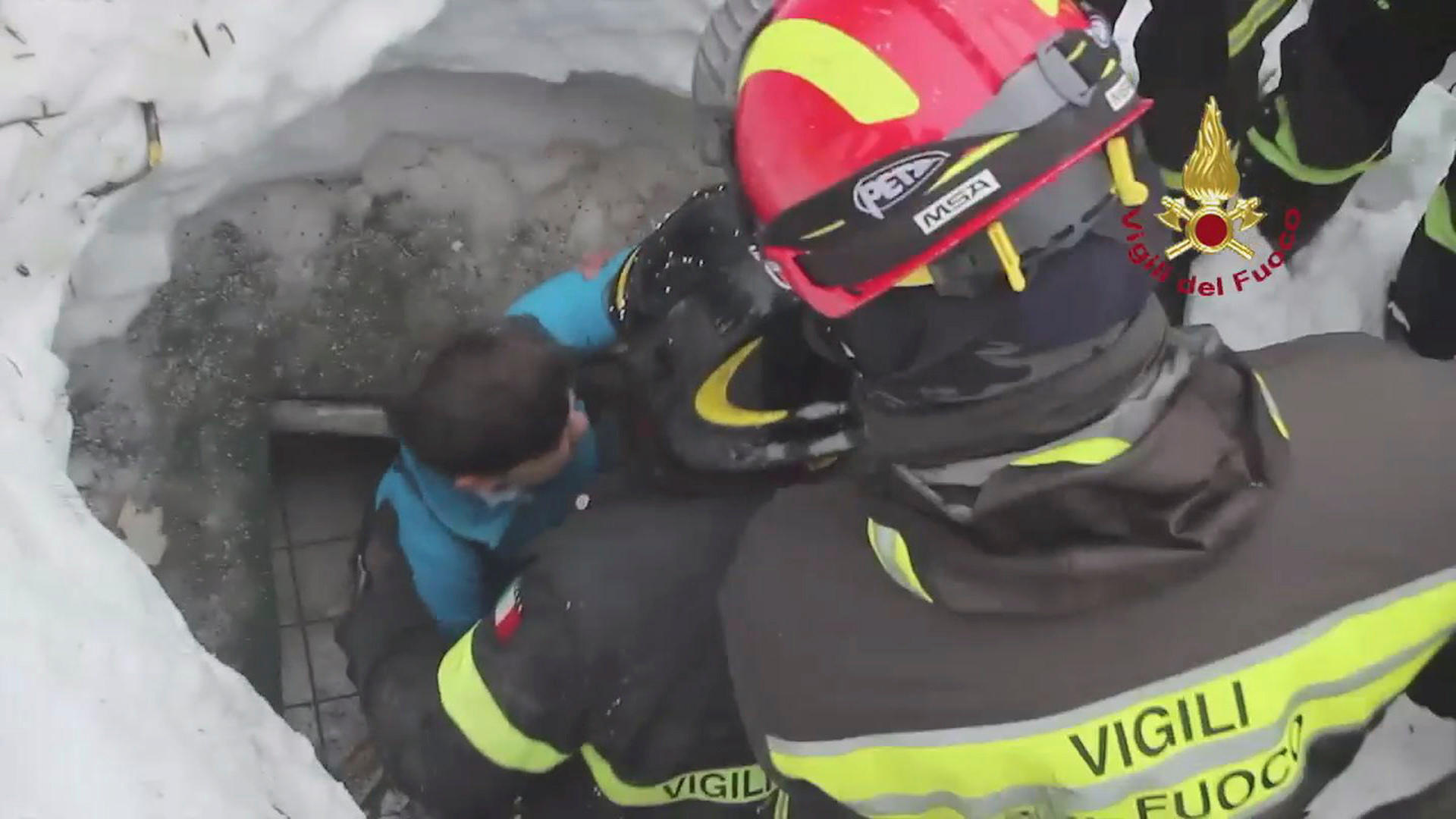 FARINDOLA, Italy -- After two days huddled in freezing cold, tons of snow surrounding them in the wreckage of the avalanche-demolished hotel, survivors greeted their rescuers Friday as “angels.” Among the 10 people pulled out alive was a plucky 6-year-old who just wanted her favorite cookies.

But for the loved ones of at least 16 others believed still trapped in the doomed mountain resort, the agonizing wait to learn their relatives’ fate dragged on.

Cheers of “Bravo! Bravo!” rang out early Friday as the first survivors were pulled from the debris, boosting spirits two days after the massive snow slide buried some 30 people. Four children were among those found alive.

“Today is a day of hope. There’s a miracle under way,” declared Ilario Lacchetta, mayor of the tiny town of Farindola, where the hotel is located.

The rescues buoyed spirits after four bodies were discovered earlier in the rubble of the luxury Hotel Rigopiano, 112 miles northeast of Rome, where the avalanche dumped 16½ feet of snow on top of the resort Wednesday.

Relatives of the missing rushed from the rescue operations center in the mountains to the seaside hospital where the survivors were taken for treatment in hopes that their loved ones were among the lucky few to be found.

First word of the survivors came around 11 a.m. when a boy wearing blue snow pants and a matching ski jacket emerged through a tunnel dug in the snow more than 42 hours after the avalanche struck.

It was Gianfilippo Parete, the 8-year-old son of Giampiero Parete, a chef vacationing at the resort who was outside the hotel when the deluge of snow hit and first sounded the alarm by calling his boss.

Next to emerge was the boy’s mother, Adriana Vranceanu, 43, wearing red snow pants and appearing alert as she told rescuers that her 6-year-old daughter, Ludovica, was still trapped inside. Mother and son were taken by stretcher to a helicopter for the ride out.

They were then reunited with Parete at a hospital in the coastal town of Pescara, suffering from hypothermia and dehydration but otherwise in good health, hospital officials said.

“They had heavy clothes,” said Dr. Tullio Spina, director of the hospital’s intensive care and anesthesia unit. “They had ski caps to cover themselves. They remained away from the snow and cold, they were always inside the structure. That’s why the hypothermia wasn’t severe.”

Little Ludovica was rescued several hours later and upon emerging asked for cookies: Ringos, an Italian version of Oreos, said Quintino Marcella, the restaurant owner who rallied the rescue after getting the phone call from her father.

The Italian fire brigade tweeted a video showing children being pulled out alive. The tweet in Italian reads: “the moving moment when three small children were rescued.”

Some 30 people were believed trapped inside the hotel in the Gran Sasso mountain range when the avalanche hit after days of winter storms that dumped nearly 10 feet of snow in some places. The region was also rocked by four earthquakes on Wednesday, though it was not clear if they set off the avalanche.

As the rescue work continued, relatives of the missing gathered anxiously at the Pescara hospital waiting for word of their loved ones.

“I just hope that my niece and her boyfriend will make it out of there,” said Melissa Riccardo. “We came to see if she was here.”

A few erupted in frustration at an evening news conference.

“The only news I have has been from the internet. They haven’t given me anything direct,” said Domenico Angelozzi, awaiting news of his sister and brother-in-law.

The number of survivors found and extracted evolved over the course of the day.

Marco Bini, a member of a police squad participating in the rescue, said the team opened a hole in the hotel roof Thursday night but “heard nothing.” Still, the persisted, following a floor plan of the hotel until they found signs of life.

Upon seeing their rescuers, the survivors “called them angels,” he said.

“They weren’t in a lot of space” but it was enough to survive, an area probably protected by the snow, Bini told Italian state TV.

Late Friday, civil protection chief Fabrizio Cari said a total of 10 people had been found alive: Five who had been extracted, including four children. Rescuers were working to remove the rest, he said.

“A beautiful feeling. Wonderful. I can’t describe it!” marveled Simona Di Carlo, aunt of Edoardo Di Carlo, after hearing word that he was among the survivors. “But I would like to see him.”

Rescue crews said one group of survivors was found in the hotel’s kitchen area in an air pocket that formed when reinforced cement walls partially resisted the avalanche’s violent power.

Those being rescued were in remarkably good condition, rescue workers said. Titi Postiglione, operations chief of the civil protection agency, said survivors would help rescuers try to locate others trapped in the hotel.

Prosecutors opened a manslaughter investigation into the tragedy and were looking into whether the avalanche threat was taken seriously enough, and whether the hotel should have been evacuated earlier given the heavy snowfall and forecasts.

“That hotel, in that historic moment, should it have been open?” prosecutor Christina Tedeschini was quoted by the ANSA news agency as saying. “If the people wanted to leave, what prevented them from doing so?”

Parete, the survivor who sounded the alarm, said the guests had all checked out and were waiting for the road to be cleared so they could evacuate. But the snowplow never arrived and the avalanche hit around 5:30 p.m. Wednesday.

In addition, pleas for a rescue team initially went unheeded by Italian authorities. Marcella, Parete’s boss, said his call to the Pescara prefect’s office was rebuffed because the hotel had informed it a few hours earlier that all was OK there.

He persisted with other emergency responders and eventually someone took his information seriously and mobilized the rescue some two hours later. Tedeschini said the delay was “a relevant theme that we will look into.”

The operation has also been hampered by fears of triggering new avalanches and building collapses onto possible survivors trapped in the rubble.

Workers have been clearing a 5.5-mile road to bring in heavier equipment, but the mountain road can handle only one-way traffic and is covered with snow and fallen trees and rocks.

Days of heavy snowfall had knocked out electricity and phone lines in many central Italian towns and hamlets, and the hotel phones went down early Wednesday, just as the first of the four powerful earthquakes struck.

The force of the massive snow slide collapsed one wing of the hotel and rotated another off its foundation, pushing it downhill.

An Alpine rescue team was the first to arrive at the hotel on cross-country skis after a seven-kilometer journey that took two hours. They found Parete and Fabio Salzetta, a hotel maintenance worker, in a car in the resort’s parking lot.

Parete was taken to a hospital while Salzetta stayed behind to help rescuers identify where guests might be buried and how crews could enter the buildings.

The mountainous region of central Italy has been struck by a series of quakes since August that destroyed homes and historic centers in dozens of towns and hamlets. A deadly quake in August killed nearly 300 people. No one died in strong aftershocks in the region in October, largely because towns had already been evacuated.