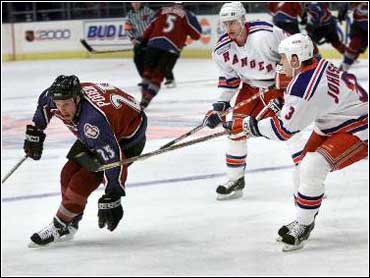 Podein had his first career hat trick to lead the Colorado Avalanche to a 4-2 victory over the New York Rangers on Friday night.

Podein completed the hat trick at 17:23 of the third period with his ninth goal of the season, converting a pass from Drury while being pulled down to make it 4-2.

"Chris made a great pass, and fortunately I was able to put it through the five-hole," Podein said.

Podein's second goal, a wraparound from behind the net at 10:33 of the second period, put Colorado ahead 2-1.

"I was just trying to put it on net," Podein said. "(Mike) Richter came across and a space opened for the puck."

Patrick Roy made 28 saves as the Avalanche won for just the second time in seven games.

Adam Graves and Kevin Hatcher scored for the Rangers, who are 1-4-2 since the All-Star break.

The Rangers took a 1-0 lead at 7:28 of the first when Graves redirected Mike York's shot from the right boards past Roy from point-blank range.

Podein made it 1-1 at the 10-minute mark when he capitalized on an aggressive forechcking shift. Reid won the puck in the Rangers end and fed Podein in the deep slot, where he turned and slipped a back-hand shot past Richter.

"Our third line was the difference in the game," Roy said. "These guys are playing a key role defensively, but if they can add some scoring touch it makes a big difference."

Roy, who sat out Thursday against the Devils with a neck injury, made a spectacular save on a short-handed breakaway attempt by Theoren Fleury with 10 seconds remaining in the first period, and stopped 16 shots in the third period to keep the Rangers at bay.

"Patrick was mediocre for two periods," Rangers coach John Muckler said. "All of a sudden he comes alive. He was outstanding in the third period."