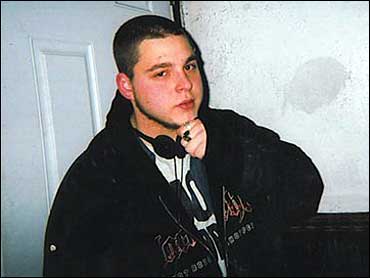 The teenager accused of going on a rampage at a gay bar and later killing two people fatally shot himself in the head in a gunfight with Arkansas police, authorities said.

Jacob Robida, 18, of New Bedford, Mass., turned the gun on himself Saturday after he fatally shot a West Virginia woman who was in his car, said Bristol District Attorney Paul Walsh Jr.

Police originally said that they shot Robida Saturday after he fired at them at the end of a high-speed chase in rural Arkansas. Robida killed Gassville, Arkansas, police officer Jim Sell and led police on a 20-mile chase before being stopped in nearby Norfork.

Police had searched for Robida since early Thursday, when they say he used a hatchet and handgun to wound three men at Puzzles Lounge, a gay bar in New Bedford.

Walsh said two of his investigators are in Arkansas and reviewed Robida's autopsy report.

Walsh said on Tuesday Robida's autopsy proved that he was killed by the same gun used in the bar attack. He said that gun also fired the bullet that killed Jennifer Rena Bailey, 33, an acquaintance Robida had picked up after fleeing Massachusetts.

Robida was shot just once, and Walsh said it was his understanding that no police bullets penetrated the car.

"He was prepared not to come out of this alive," he said.

Police in Massachusetts, who are investigating whether Robida had an accomplice in the bar attack, searched Robida's room and discovered a handwritten note in which Robida bid his mother goodbye and suggested he would again resort to violence.

The contents of the note were not released. It was unclear whether Robida left the note before or after the nightclub attack.

Robida also had a small cache of weapons with him as he fled westward, an Arkansas prosecutor said. Investigators don't know why, nor why he and his female companion were in Arkansas.