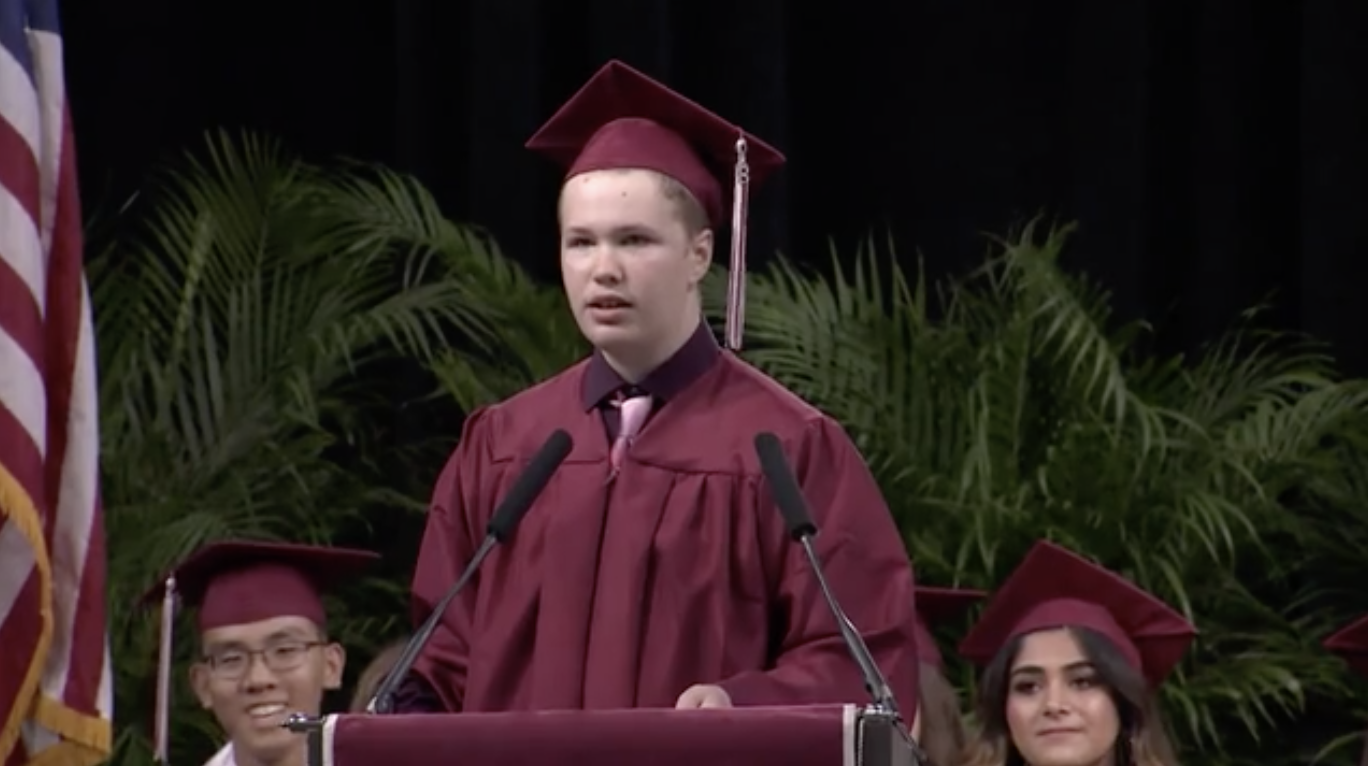 An autistic high school senior who is usually nonverbal did the unexpected at his high school graduation this week. Sef Scott bravely stepped up to the podium and delivered a speech with an inspiring message: be the unexpected, just like him.

"Unexpected. That is what I want you to remember. Unexpected," Scott began his speech. "First and foremost, I would imagine that to the seniors that know who I am that it is entirely unexpected that I would be standing here giving this speech."

Scott introduced himself to the crowd. "Let me briefly explain this unexpected choice of speaker. My name is Sef Scott and I am a student with learning differences. To be more specific, I have autism and a social communication disorder," he said.

He explained that while he has the vocabulary and speaking ability that most people do, it is not a normal thing for him to electively speak. "Just by being here speaking to all of you -- me -- that alone is unexpected," Scott said. The audience responded with applause.

Scott explained that his brother, a brain tumor survivor, began giving speeches at events to raise money for various children's charities. He said his brother and mother helped him write his graduation speech sentence by sentence to make his voice heard.

Along with his powerful message about being and doing the unexpected, he also cracked a few jokes. "We all share one thing in common for sure. We all made it," he told the graduates. "And how do I know that? Well, it's kind of obvious. You're all here with me at a graduation ceremony wearing those caps and gowns. Yes, I have autism, but I am also a smart alec. Unexpected, right?" This line earned him second -- but not final -- round of applause.

All jokes aside, Scott offered some advice on how to do the unexpected. Standing in line a restaurant? When your name is called, let the people behind you go first, he says. "That simple gesture could brighten what could have been a gloomy day." Bought tickets to an event in advance and suddenly not be able to make it? Donate your tickets, he suggested. And pause to say "thank you for doing a great job" to the person with special needs who bagged your groceries.

"You can sprinkle unexpected moments throughout your everyday life that can benefit those around you with very little effort on your part."

The biggest kind of unexpected, Scott says, is to live for yourself. "Ask yourself: are you next steps where you want to go? If they aren't, step off of that path. Will that be unexpected? It probably will be if you are not sharing your hopes and dreams with your loved ones," he said.

"Don't follow someone else's dreams. Don't waste time on something you never wanted. Do the unexpected. It is your life that you are living, not someone else's so do what fulfills you."

Scott spoke for nearly six minutes -- a personal accomplishment. But it wasn't just the quantity of his words, it was the quality that earned him a standing ovation. The audience rose to their feet with thunderous applause when Scott finished his speech. He wished the class of 2018 good luck, and walked off the stage with confidence.