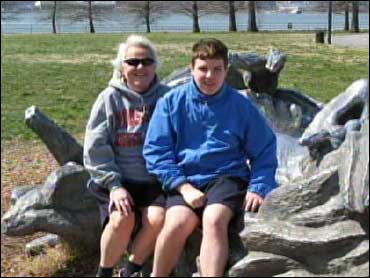 A Kent State University professor who was fatally beaten in her home was devoted to caring for her 18-year-old, severely autistic son, friends say.

He is charged with attacking her, but should he stand trial in his mother's death? The question was raised on The Early Show Saturday Edition.

There was a memorial service Friday night on the Kent State campus for Gertrude "Trudy" Steuernagel, 60.

She struggled to raise her son, Sky Walker, but she loved him and would want people to know that autism doesn't equal violence, said Steven Hook, chairman of the school's political science department, where Steuernagel taught political theory and women's studies.

Steuernagel died a week after she was severely injured in a beating.

An autopsy showed bruises around her head and chest, said Gary Guenther, an investigator with the Summit County medical examiner's office. The cause of death had not been determined.

Walker, who is being held in jail on $2 million bond, was scheduled to be arraigned on charges of attempted murder and assault on a police officer. Portage County Sheriff David Doak said the charge might be upgraded to murder.

Errol Can, an attorney representing Walker, declined to comment. Authorities have not discussed a possible motive.

Walker was diagnosed with autism before he turned three. His father lived with the family until the mid-1990s, and in recent years was completely removed from Walker's life, said fellow Kent State Prof. Molly Merryman, a colleague and close friend of Steuernagel's.

"I really, more than anything, want to say that these were a mother and son who loved each other deeply," said Merryman, who hosted Steuernagel and Walker at her farm on weekends.

Steuernagel wrote op-ed articles for the campus newspaper, the Daily Kent Stater, about the challenges of having an autistic child. Sky can barely speak.

"I had no patience with good and decent colleagues who told me how busy they were," she wrote last March. "Busy? Try spending an evening sitting in a closet with your back to the door trying to hold it shut while your child kicks it in."

Her son may have been a source of stress, but Steuernagel wrote that she also found him to be a source of joy.

"Sky, as he always does, showed me the way," she wrote. "Even on the worst of days, Sky would find something to enjoy, even if it lasted less than 30 seconds ... So I started to look for my joy."

As he got older, Sky became more difficult, and sometimes violent, Merryman says, adding his mom never gave up, and instead always stayed focused on those good moments they had. Indeed, Sky is a "delightful" boy, Merryman told CBS News.

"Sky and Trudy had an incredible full and loving relationship," Merryman told co-anchor Chris Wragge on The Early Show Saturday Edition. "And, despite Sky's inability to speak, it was always very evident to those who were privileged to associate with them that Sky was devoted to his mother. They both had a wicked sense of humor, and it was always evident that their jokes went back and forth, that there was just an absolute faith and level of love. And I don't think necessarily we need words to convey the love."

"I think," she continued, "all of us a still struggling to imagine this. And, you know, having spent countless hours with Sky and Trudy, I always saw them as a loving pair. I never witnessed anything that would prepare me for this.

"We have comforted ourselves knowing that Trudy never awoke and never knew that Sky was in jail.

"I think there's a couple of things that Trudy would want. One is, quite immediately, she would want her son to have the best quality care, and I can say that he does. The jail has been extraordinary in adapting to his autism.

"I think the second thing that Trudy would want, and this is why I'm here talking to you, is to recognize that there needs to be more with autism. We need to be researching more. We need to be providing better coverage and benefits, and we need a greater understanding.

"This is a tragedy that shouldn't have happened. And, if we pool our resources together and support families with autism, support the efforts to change legislation to improve benefits, I think we can mitigate this tragedy and make something beautiful and wholesome and wonderful."

Asked by Wragge if he thinks a teen who's autistic and barely verbal should be awaiting trial, facing a potential life sentence, CBS News legal analyst Mickey Sherman said, "Of course not. But the problem is the criminal justice system is not prepared for situations like this. We're too black and white. They're either crazy or insane. In other words, they suffer from a mental disease or defect that won't allow them to conform their conduct to society, which is clearly the situation here, or they're responsible for their acts. Clearly he is not responsible. But we don't know what to do at this point. He has not been adjudged insane."

Is he likely to spend the rest of his time behind bars?

"And the flip side is, while we're raising peoples consciousness to autism, the negative side of this, which makes it a feel-bad story, is we're also putting a stigma on autism, where people may take away from this story, 'Wow! Autistic kids are not only ill, but they could be murderers.' And that's certainly not the message you want to send in this case."

How to Surveillance-Proof Your Hotel Room