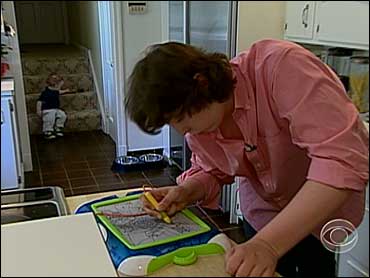 When Susan Murray discovered she was expecting her third son, her joy was overshadowed by her fear.

"Worry has been there since the first moment," Murray said.

That worry: having another son with autism. Sixteen-year-old Owen was just 18 months, Tighe's age now, when his parents received the diagnosis that changed their lives.

"I remember watching Owen change," said Kevin Murray, Owen's father. "He's walking on his toes and moving his hands in a strange way and shrieking."

"This mutation is present in nearly 65 percent of children who have autism," said Dr. Hakon Hakonarson, said a study leader and director of the Center for Applied Genomics at Children's Hospital of Philadelphia.

Using the world's largest DNA database, researchers discovered a defect that disrupts synapses - the way brain cells communicate with each other.

"Language, our gestures, our facial expressions - if the synapses between brain cells are not functioning properly, it's difficult to carry out those complex social behaviors," said Dr. Geraldine Dawson, the chief science officer of Autism Speaks, a science and advocacy organization.

These studies offer families more hope for better diagnosis and early intervention, and are a step toward new treatment.

"We have children who will have children, and clearly that is a very important piece of the puzzle," said Kevin Murray.

It's important to remember that many factors cause autism, and often there is an environmental trigger as well, so this is just one piece of the puzzle, but it's a big one, Ashton said.

CBS News anchor Katie Couric asked Ashton if researchers are optimistic that the discovery of this gene defect will actually lead to treatment in the future.

"They are, the first step was finding the problem," Ashton said. "Once they found it, then they can boost this protein in the future. And while we need to use caution - this is probably five to ten years away - it's very exciting."