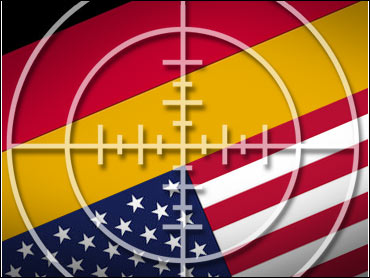 But "there are no indications of an imminent threat," said a U.S. defense official, who spoke on condition of anonymity given the subject's sensitivity.

The plot was first made public on April 20 when the U.S. embassy in Berlin issued a warning, telling U.S. diplomatic and consular facilities in Germany to increase security and asking Americans there to increase their vigilance. Security outside U.S. bases in Germany was also stepped up.

U.S. officials say they have nothing to suggest the threat information has advanced beyond where it was three weeks ago, reports CBS News correspondent Bob Orr. At the same time, there's also no evidence that the possibility of a threat has been diminished. Extra precautions are still in place and there's still a high level of concern.

A U.S. counterterrorism official, who also spoke on condition of anonymity, said the concern — then and now — is that U.S. military bases, American tourists and other U.S. interests in Germany could be attacked. Among other possibilities, the official said information gathered on the threat suggested that the plot could involve bombs or small arms. The threat information was not specific about the potential attack's time or location, the official added.

The official said counterterrorism authorities believed Islamic extremists were behind the planning, but the official had no reason to suspect al Qaeda specifically.

Gordon Johndroe, a spokesman for the White House's National Security Council, said "the United States is working with German authorities, as we do with our allies around the world, to counter any potential terrorist activity."

The Homeland Security Department sought to make clear there was no known plot inside U.S. borders.

"There is no credible intelligence to suggest an imminent threat to the homeland at this time," said spokesman Russ Knocke.

In Germany, Daniel Mattern, a spokesman for the U.S. Embassy in Berlin, said there had been no changes since it issued its April 20 warning for U.S. diplomatic and consular facilities.