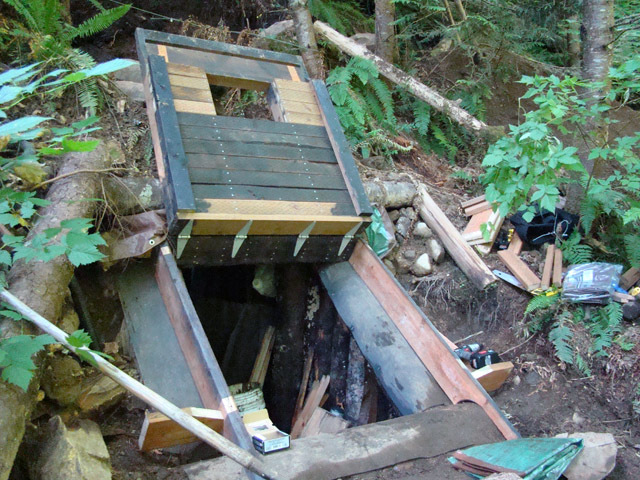 (AP) NORTH BEND, Wash. - Authorities on Friday surrounded an elaborate, underground bunker believed to be that of a gun-toting survivalist suspected of killing his wife and daughter nearly a week ago and then holing up in the woods of Washington state.

They pumped gas into the structure in the Cascade foothills east of Seattle and saw movement inside, but the dozens of officers were not entering the bunker because they believed its occupant was heavily armed, and that it might be booby-trapped.

Sheriff's officials said later Friday they weren't sure the gas penetrated deep enough to reach the person inside, who they believed was 41-year-old Peter Keller, and officers were pulling back to reassess their options. The standoff continued into Friday evening.

Keller has not been seen since a fire at his North Bend-area home Sunday led responders to discover the bodies of his wife and daughter. The two had been shot to death.

"It's a very extreme tactical situation," King County Sheriff Steve Strachan said. "Time is on our side. We're not going to do anything rash."

Sgt. Cindi West said evidence found in Keller's home helped authorities locate the bunker, dug 20 feet into the side of a ridge in an area of dense vegetation, at noon Friday.

Officers were able to pinpoint the location after enhancing a blurry photograph found on a hard drive in an open safe in Keller's house, she said. The photo included a view from the bunker in which buildings in nearby North Bend were visible, along with a set of power lines.

Detectives triangulated the rough area of the bunker and were confident they had the right location after receiving tips from people who had seen Keller's faded red pickup truck parked at the trailhead, West said.

Two experienced trackers were sent to the area and found tracks that appeared to have been made by someone carrying a heavy backpack.

SWAT teams went into the woods at 5 a.m. and could smell wood smoke from the wood stove in the bunker before they could see it, West said.

The bunker was found at about the 1,350-foot level, several hundred yards due east of a trailhead at Rattlesnake Ridge. It had several entryways and ladders.

"This isn't a hole in the ground. It's an elaborate structure," Strachan said.

Court documents described Keller as a loner who has a survivalist mentality and has been stockpiling supplies in the woods.

The fire at Keller's home was stopped before the house burned down, and authorities said they found seven gasoline cans placed in different areas of the home.

The King County medical examiner has determined Kaylene Keller, 18, and her mother, Lynnettee Keller, 41, both died from gunshots to the head. Their bodies were found in their bedrooms.

Kaylene's boyfriend told detectives that Peter Keller had shown him his gun collection and several large-caliber rifles and handguns, court documents said. The boyfriend, who was not identified, said Kaylene had told him her father took long hikes on the weekends and was stockpiling supplies at a fort in the woods.

Peter Keller withdrew $6,200 from a bank last week and told one of his co-workers at a computer refurbishing store in Preston that he might not return, according to court documents.

Officers with the SWAT team had spent Friday morning searching a popular hiking area known as Rattlesnake Ridge just outside North Bend. Deputies closed trails and roads leading into the area of dense trees and networks of hiking and biking trails. Sheriff's vehicles dotted housing developments that abutted the ridge.

Sally Betts of Vashon Island had been hoping to hike Rattlesnake Ridge with her friends from the Renton Women's Hiking Club, but drove off for another trail after learning of the search.

"We thought that Rattlesnake is so popular, he wouldn't be there. He's an outdoorsman — he'll be off on the wilderness somewhere," Betts said.