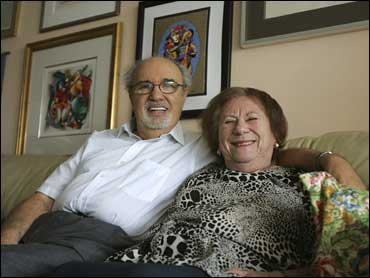 The author of a discredited Holocaust memoir is not apologizing.

Herman Rosenblat, who has acknowledged inventing his story of meeting his wife on opposite sides of a concentration camp fence, told "Good Morning America" that he has no regrets and would tell the story again given another chance.

"It wasn't a lie," he said during a taped segment aired Wednesday. "It was my imagination, and in my mind, I believed it. Even now, I believe it."

Until scholars refuted him, Rosenblat and his wife, Roma, were beloved worldwide and appeared twice over the past decade on Oprah Winfrey's talk show. His tale of meeting his future wife at a sub-camp of Buchenwald, where she allegedly sneaked him apples and bread, endearing him to millions.

Rosenblat, a Holocaust survivor whose book, "Angel at the Fence," was pulled last year before publication, told GMA that his wife went along with his story "because she loves me."

Winfrey has since criticized Rosenblat, but her Web site, www.oprah.com, still includes his admittedly false story as the first example of "Love Lessons from Amazing Couples."