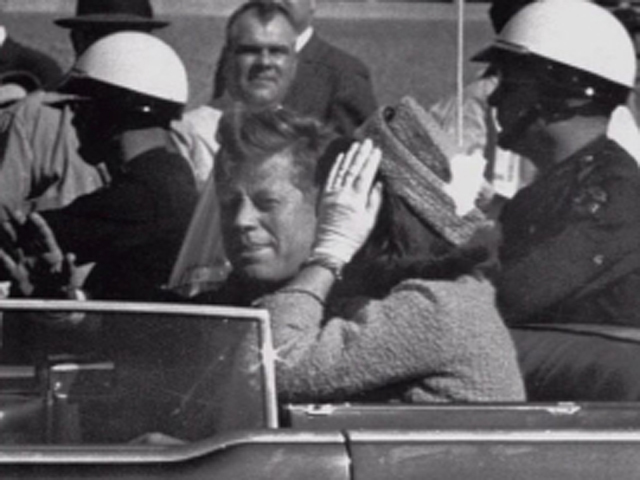 We all think about rewriting history, at least on a personal level.

In his new book, "Then Everything Changed: Stunning Alternative Histories of American Politics: JFK, RFK, Carter, Ford, Reagan," Greenfield asked a series of what-if questions about each leader, and the result is an alternate history of the last 50 years.

Read an excerpt of "Then Everything Changed."

What made Greenfield want to write about what didn't happen?

On "The Early Show" Monday, Greenfield explained, "I worked for Robert Kennedy. I've been asked dozens of times, 'What would have happened if he lived?' I've always said, 'Who knows?' And one day, because I read a book about what might have happened with Mayor Daley in Chicago, I started thinking about the chain reactions. If he'd, lived the country would have felt differently about him -- even his opponents. And then what? So it just started a chain reaction. Then I went back to the one that nobody knows about that changed history."

"Which was fascinating to me," co-anchor Chris Wragge said. "It's the first chapter, and it was about this gentleman, Richard Pavlik, kind of this crazy from New Hampshire who had an ax to grind with soon-to-be president Kennedy."

How small twists of fate could have changed popular culture

Greenfield explained, "He was parked outside of Kennedy's beach house with a car filled with dynamite. The only reason he didn't blow John Kennedy up was that Jackie came to the door and he didn't want to do it in front of his wife. We were seconds away, the Secret Service chief said, from losing John Kennedy before he ever became president, no new frontier, Lyndon Johnson at the Cuban missile crisis. You start playing that out."

Wragge remarked, "The series of events that follow in the book. It was amazing. That was December of 1960."

Greenfield said, "He was president-elect."

"And literally this gentleman was sitting there watching, finger on the plunger," Wragge said. "He was that close."

"And this has become so obscure in history that even a couple of John Kennedy's biographers didn't know about him," Greenfield said.

"You're absolutely right," Greenfield said. "We almost lost Franklin Roosevelt to a deranged anarchist in Miami in 1933 before he ever got to be president. If John Hinkley's gun had been pointed in a slightly different way, Reagan would have lasted -- President Reagan would have been eight weeks. And think about 2000. How many different little tiny incidents like the size of a ballot could have determined who the next president was?"

But why did Greenfield settle on writing about these five Americans?

"They all had to be events that almost really happened," he said. "So for instance, I couldn't make George McGovern beat Richard Nixon or Barry Goldwater beat Lyndon Johnson, because that was too big a spread. But if you think about 1976, President Ford makes a mistake, he says there's no Soviet domination in Eastern Europe, he's given a chance to correct himself. And he says, 'No, I meant it.' Cost him a week. That election was decided by a few thousand votes in a few states. Not the popular vote, but the electoral vote. All that did was for Ford to go, 'Wait, I didn't mean that.' Now he's president. Instead of Jimmy Carter. Does the Shah of Iran fall a year later? His national security adviser, who I interviewed, said, 'We never would have let him fall, because the ayatollah would come to power.' Is there a 'Nightline' if there's no hostage crisis? There's dozens of things, big and small, all changed by the merest little twist of fate. And that's the lesson of the book, I think."

The book has long been in the works, Greenfield said.

He said, "From the idea of actually doing the book and persuading the publisher to write it, maybe 15 months. From thinking about this to writing a book, 15 years."

Wragge noted Greenfield observed there is a narrow window of opportunity for politicians to become president.

Greenfield responded, "Almost certainly. And if Florida and Michigan in 2008 had kept their primary dates where they were and counted, she'd have been the nominee of the Democratic Party. Now I think, this notion of it's too late, we've seen that the whole point in this book is you cannot predict what fate will do. Old proverb, you want to hear god laugh, make a plan. And I think there's a lesson for all of us about that. There's just so much -- you see all these amazing historical events that would have been in many ways totally different -- but for a missed meeting, it didn't rain in Dallas, so the bubble top came off John Kennedy's car. They're almost endless."