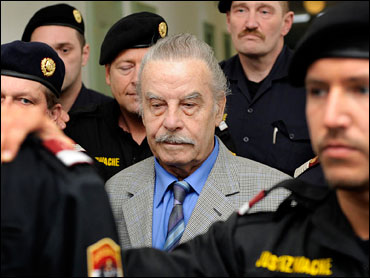 A jury has convicted Austrian incest father Josef Fritzl of homicide and sentenced him to life imprisonment in a secure psychiatric facility.

Fritzl also was convicted of enslavement, rape, incest, forced imprisonment and coercion for holding his daughter captive for 24 years and fathering her seven children.

Fritzl accepted Thursday's verdicts and waived his right to appeal.

The homicide count, "murder by neglect" in German, was the most serious of the charges against 73-year-old Fritzl, and the jury gave him the maximum punishment allowed by law.

The verdict brought a dramatic end to a case that has drawn worldwide attention.

Prosecutors had urged the jury to hand down a life sentence for Fritzl and not to show mercy just because he pleaded guilty.

In a weak and shaky voice, Fritzl told the court Thursday: "I regret it with all my heart. ... I can't make it right anymore."

Prosecutor Christiane Burkheiser called for the maximum punishment in her closing arguments in Fritzl's trial in St. Poelten, west of Vienna. She urged the jury to think about his daughter Elisabeth's nearly quarter-century ordeal as it considers how much time he should serve.

"Don't be duped like Elisabeth was 24 years ago," when Fritzl took her captive in a cramped, rat-infested dungeon he built beneath the family's home.

The eight-member jury began deliberating at midmorning. Verdicts and sentences were expected Thursday afternoon in the case, which has drawn worldwide attention.

Fritzl, 73, pleaded guilty Wednesday to all the charges against him, including homicide for the death in captivity of an infant boy. Prosecutors contend the ailing newborn might have survived if Fritzl had arranged for medical care.

"Any amateur could have determined that the child was in the throes of death for 66 hours," Burkheiser said, arguing that Fritzl should be locked up for the rest of his life for refusing to intervene and save the baby's life.

Eva Plaz, a lawyer for Elisabeth and the other victims, urged the jury not to lessen Fritzl's sentence just because he pleaded guilty. In Austria, guilty pleas can be a mitigating factor.

Fritzl's pleas "were not a confession," Plaz said.

Fritzl's lawyer, Rudolf Mayer, did not argue that Fritzl was innocent - even telling the court at one point that Fritzl raped his daughter 3,000 times. But he said Fritzl had been plagued with guilt for the past 24 years, and he asked the jurors to take a hard look at the homicide charge.

"Look closely at murder," Mayer said, referring to the homicide count - literally "murder by neglect" in German. "In my opinion, that's not what it is," he said.

The Associated Press normally withholds the names of victims of sexual assault. In this case, withholding Elisabeth's name became impractical when her name and her father's were announced publicly by police and details about them became the subject of publicity both in their home country and around the world.

Mayer confirmed Thursday that Elisabeth had been in the courtroom earlier this week, and he said Fritzl decided to stop contesting the homicide and enslavement counts after viewing her 11-hour heart-wrenching videotaped testimony.

Elisabeth, the prosecution's key witness, is 42. She was 18 when Fritzl imprisoned her in the squalid cell he built beneath the family's home in the town of Amstetten, where he raped her for years, sometimes in front of the children.

Elisabeth and her six surviving children, who range in age from 6 to 20, have spent months recovering in a psychiatric clinic and at a secret location. Prosecutors have described her as a "broken" woman.

Police say DNA tests prove Fritzl is the biological father of all six surviving children, three of whom never saw daylight until the crime was exposed 11 months ago.

The three other children were brought upstairs to be raised by Fritzl and his wife, Rosemarie, who was led to believe they were abandoned by Elisabeth when she ran off to join a cult.

Psychiatrist Adelheid Kastner told the court Wednesday that Fritzl has a serious personality disorder and would pose a threat to others if freed. She recommended that Fritzl serve his sentence in a special prison for psychologically deranged criminals or a ward for abnormal criminals in a regular jail.