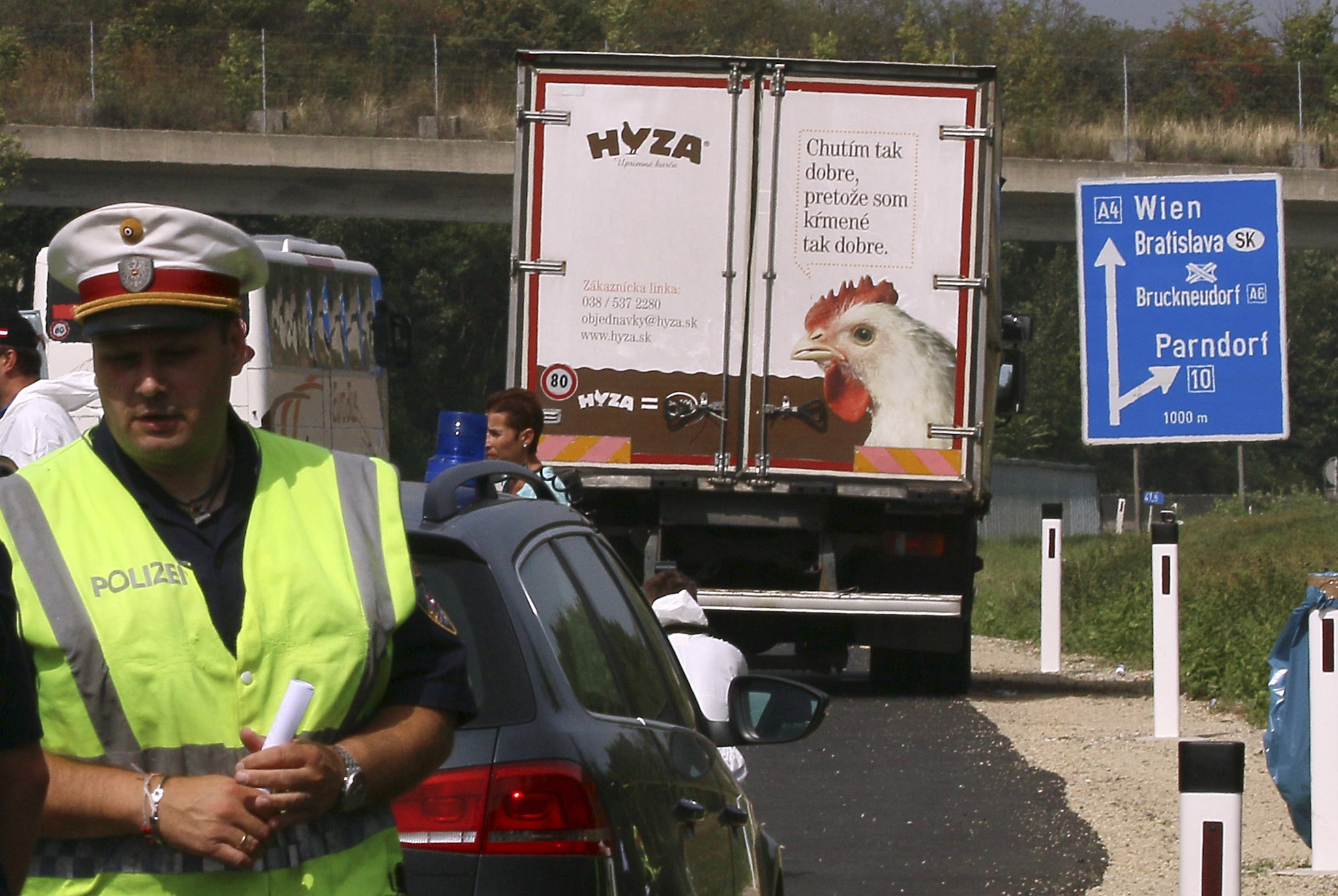 PARNDORF, Austria -- Austrian police on Thursday discovered the badly decomposing bodies of at least 20 - and possibly up to 50 - migrants piled in a truck parked on the shoulder of the main highway from Budapest to Vienna.

The shocking finding came as Austria hosted a summit in Vienna on Europe's refugee crisis for Western Balkan nations, which have been overwhelmed this year by the tens of thousands of migrants trying to get into Europe via their territory.

Police ordered reporters at the scene 25 miles southeast of Vienna to move away from the vehicle, a white refrigeration truck with images of food items on it.

The state of the bodies in the hot summer day made establishing their identities and even the exact number of dead migrants difficult, but the total number could rise to 50, said Hans Peter Doskozil, chief of Burgenland police.

The truck was apparently abandoned Wednesday and its back door was left open, Doskozil said. It had Hungarian license plates but writing on the side and back of it was in Slovak. The state of the bodies suggested the migrants could have been dead for several days.

"Human smugglers are criminals," she said in a statement. "Those who still think that they are gentle helpers of refugees are beyond saving."

Speaking on the sidelines of the refugee crisis conference, Austrian Chancellor Werner Faymann said the deadly tragedy showed how critical it was for nations to work together on solutions to the influx of migrants.

"Today refugees lost the lives they had tried to save by escaping, but lost them in the hand of traffickers," he told reporters.

German Chancellor Angela Merkel, who was also at the summit, said she was "shaken by the awful news that up to 50 people lost their lives on their way to look for more security."

"This reminds us that we in Europe need to tackle the problem quickly and find solutions in the spirit of solidarity," she said.

The truck apparently used to belong to the Slovak chicken meat company Hyza, part of the Agrofert Holding, which is owned by the Czech Finance Minister Andrej Babis.

Agrofert Holding, in a statement, said they had sold the truck in 2014. The new owners did not remove the truck's logos as required and the Hyza company has nothing to do with this truck now, the company said.

On one side of the truck was the slogan "Honest chicken" while writing on the back read "I taste so well because they feed me so well."

The Hungarian government said the truck's license number plates were registered by a Romanian citizen in the central city of Kecskemet.

Migrants fleeing war and poverty from the Middle East, Africa and Asia are flocking to Europe by the hundreds of thousands this year.

Many follow the Balkans route, from Turkey to Greece by sea, up north to Macedonia by bus or foot, by train through Serbia and then walking the last few miles into EU member Hungary. That avoids the more dangerous Mediterranean Sea route from North Africa to Italy, where the bodies of 51 migrants were found Wednesday in the hull of a smugglers' boat rescued off Libya's northern coast.

Once inside the 28-nation EU, most migrants seek to reach richer nations such as Germany, The Netherlands, Austria or Sweden.

8-year-old boy missing for over a week found alive in sewer
Thanks for reading CBS NEWS.
Create your free account or log in
for more features.
View CBS News In
CBS News App Open
Chrome Safari Continue
Be the first to know
Get browser notifications for breaking news, live events, and exclusive reporting.