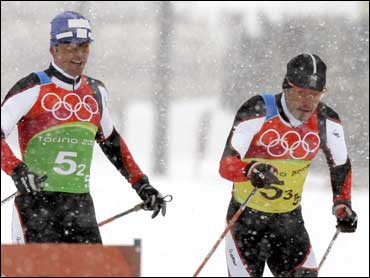 The Austrian Olympic Committee was fined $1 million by the IOC on Thursday in connection with the doping scandal at the 2006 Winter Games in Turin.

The Lausanne-based International Olympic Committee said its executive board had unanimously decided on the penalty, which will be imposed by withholding from the Austrian committee its share of IOC revenues up to that amount.

The IOC also gave the Austrian committee a year to complete its investigation into the role played by the national Olympic body, team coaches, doctors and officials in the doping case involving four cross-country skiers and two biathletes, who were last month issued lifetime Olympic bans.

The Austrian committee must report on its investigation by June 30, 2008, when it should demonstrate "the internal organizational changes that have been implemented," said the IOC, which did not elaborate on what changes it expected to be carried out.

Wallner said the scandal potentially could have knocked Austrian athletes out of at least the 2008 Summer Games and the 2010 Winter Olympics.

The federation "compromised the Olympic spirit," he said, adding that the Austrian Olympic Committee would take disciplinary measures against the ski federation for putting "an entire generation of athletes" at risk.

Wallner said one measure could be to require all federation athletes and officials to swear to uphold the values and ethics of the Olympic movement.

Officials who were in charge of Austria's cross country ski and biathlon teams also could be banned for life from the Olympics, and the ski federation could wind up having to pay the fine imposed Thursday, Wallner said. He said those and other measures would be decided at a meeting next Tuesday.

Heinz Jungwirth, AOC general secretary, said Wednesday the board members would vote on whether to remove Austrian ski federation chief Peter Schroecksnadel of his duties as AOC vice president unless he resigned beforehand.

The four cross-country skiers have appealed their bans to the Court of Arbitration for Sport. The two biathletes have retired from the sport.

It was the first time the IOC has disqualified athletes for doping violations without positive tests. The punishments were based on evidence seized in Italian police raids on the Austrians' living quarters during the Turin Games.

Italian police raided Austrian team lodgings outside Turin on Feb. 18, 2006, seizing a large amount of doping products and equipment. The move followed a tip that former Austrian coach Walter Mayer, who was implicated in blood-doping at the Salt Lake City Games and banned from the Turin Olympics, was in the area.

In tandem with the police action, Olympic drug-testers conducted surprise doping checks on 10 Austrian athletes. The tests came back negative, but the IOC continued its investigation based on the police findings.

The Italian report, handed over to the IOC early this year, said police found syringes, needles, blood bags, butterfly valves for intravenous use, bottles of saline and devices for measuring hemoglobin levels and determining blood groups, as well as the banned substances hCG and albumin.

An IOC disciplinary panel hearing in Lausanne earlier this month heard testimony from Jungwirth about the role of Austrian Olympic and ski officials in the scandal. The investigation put several Austrian sports officials under scrutiny, including Schroecksnadel and Markus Gandler, the ski federation's cross country and biathlon sports director.

Schroecksnadel didn't attend the hearings but has repeatedly stated that he and his federation knew nothing about any drug use. Gandler testified on May 2 that he wasn't aware of any team members using performance-enhancing drugs at the Turin Olympics.

Peter Baumgartl, a team doctor, was also scheduled to testify but opted instead to submit a written statement. Baumgartl had already received a "strong warning" from the IOC in connection with a blood doping case at the 2002 Salt Lake City Olympics.

The action comes as an Austrian city, Salzburg, is bidding for the 2014 Winter Olympics. The IOC is to select the host city on July 4. Sochi, Russia, and Pyeongchang, South Korea, are the two other finalists.