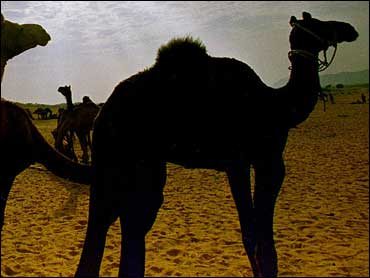 An Australian woman was killed by a pet camel given to her as a 60th birthday present after the animal apparently tried to have sex, police said Sunday.

The woman, whose name was not released, was killed Saturday at her family's sheep and cattle ranch near Mitchell, 350 miles west of the Queensland state capital Brisbane, state police Detective Senior Constable Craig Gregory said.

The 10-month-old male camel — weighing about 330 pounds — knocked the woman to the ground, lay on top of her, then exhibited what police suspect was mating behavior, Gregory said.

"I'd say it's probably been playing, or it may be even a sexual sort of thing," Gregory said, adding the camel almost suffocated the family's pet goat by straddling it on several occasions.

Camel expert Chris Hill said he had no doubt the camel's behavior was sexual.

Hill, who has offered camel rides to tourists for 20 years, said young camels are not aggressive, but can be dangerous if treated as pets without discipline.

The fate of the camel was not known.

The woman was given the camel in March as a birthday present from her husband and daughter. "She had a love of exotic pets," Gregory said.