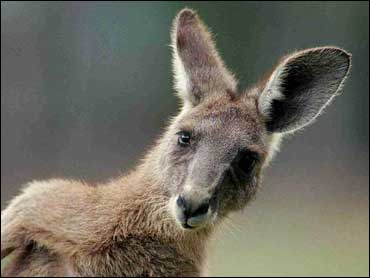 When a dark intruder smashed through his bedroom window and repeatedly bounced on his bed, Beat Ettlin at first was relieved to discover it was a kangaroo.

"My initial thought when I was half awake was, 'It's a lunatic ninja coming through the window,"' the 42-year-old told The Associated Press on Monday. "It seems about as likely as a kangaroo breaking in."

But his relief was short-lived. As Ettlin cowered beneath the sheets with his wife and 9-year-old daughter at 2 a.m. Sunday, the frantic kangaroo bounded into the bedroom of his 10-year-old son Leighton Beman, who screamed, "There's a 'roo in my room!"

I thought, 'This can be really dangerous for the whole family now,"' Ettlin said.

The ordeal played out over a few minutes in the family's house in Garran, an upmarket suburb in the leafy national capital of Canberra.

Ettlin, a chef originally from the Swiss city of Stans, said he jumped the 90-pound marsupial from behind and pinned it to the floor. He grabbed it in a headlock and wrestled the trashing and bleeding intruder into a hallway, toward the front door.

He used a single, fumbling hand to open the front door and shoved the kangaroo into the night.

"I had just my Bonds undies on. I felt vulnerable," he said, referring to a popular Australian underwear brand.

The kangaroo, which Ettlin said was around his height, 5 foot 9 inches, left claw gouges in the wooden frame of the master bed and a trail of blood through the house. The animal was cut when it came crashing through the bedroom window.

Ettlin, who had scratch marks on his leg and buttocks and was left wearing only his shredded underpants, described himself as "lucky."

The kangaroo vanished into a nearby forest from where it likely came. Wildlife authorities confirmed Monday they had received a phone call saying an injured kangaroo had entered the caller's home and left.

Greg Baxter, a Queensland University lecturer on Australian native animals, said kangaroos rarely invade homes but have done so in the past when panicked.

"It is very unusual, but when kangaroos become panicked, they lose all sense of caution and just fly for where they think they can get away," Baxter said.

Eastern gray kangaroos are common around Canberra's forested urban fringe. They are so numerous at one defense department site in the city that officials want to cull hundreds of the animals to stop them ruining the habitat.

Although it had been a harrowing experience, Ettlin's wife could see the funny side.