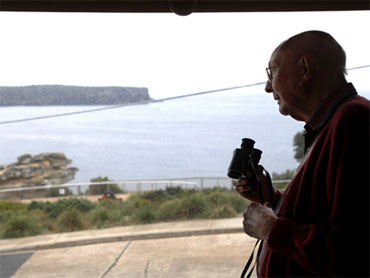 In those bleak moments when the lost souls stood atop the cliff, wondering whether to jump, the sound of the wind and the waves was broken by a soft voice. "Why don't you come and have a cup of tea?" the stranger would ask. And when they turned to him, his smile was often their salvation.

For almost 50 years, Don Ritchie has lived across the street from Australia's most notorious suicide spot, a rocky cliff at the entrance to Sydney Harbour called The Gap. And in that time, the man widely regarded as a guardian angel has shepherded countless people away from the edge.

What some consider grim, Ritchie considers a gift. How wonderful, the former life insurance salesman says, to save so many. How wonderful to sell them life.

"You can't just sit there and watch them," says Ritchie, now 84, perched on his beloved green leather chair, from which he keeps a watchful eye on the cliff outside. "You gotta try and save them. It's pretty simple."

Since the 1800s, Australians have flocked to The Gap to end their lives, with little more than a 3-foot fence separating them from the edge. Local officials say around one person a week commits suicide there, and in January, the Woollahra Council applied for AUS$2.1 million ($1.7 million) in federal funding to build a higher fence and overhaul security.

In the meantime, Ritchie keeps up his voluntary watch. The council recently named Ritchie and Moya, his wife of 58 years, 2010's Citizens of the Year.

He's saved 160 people, according to the official tally, but that's only an estimate. Ritchie doesn't keep count. He just knows he's watched far more walk away from the edge than go over it.

Dianne Gaddin likes to believe Ritchie was at her daughter's side before she jumped in 2005. Though he can't remember now, she is comforted by the idea that Tracy felt his warmth in her final moments.

"He's an angel," she says. "Most people would be too afraid to do anything and would probably sooner turn away and run away. But he had the courage and the charisma and the care and the magnetism to reach people who were coming to the end of their tether."

Something about Ritchie exudes a feeling of calm. His voice has a soothing raspiness to it, and his pale blue eyes are gentle. Though he stands tall at just over 6'2" (an inch shorter, he notes with a grin, than he used to be), he hardly seems imposing.

Each morning, he climbs out of bed, pads over to the bedroom window of his modest, two-story home, and scans the cliff. If he spots anyone standing alone too close to the precipice, he hurries to their side. 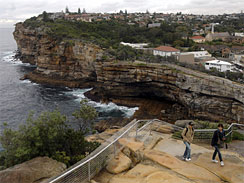 (AP Photo/Jeremy Piper)
Some he speaks with are fighting medical problems, others suffering mental illness. Sometimes, the ones who jump leave behind reminders of themselves on the edge - notes, wallets, shoes. Ritchie once rushed over to help a man on crutches. By the time he arrived, the crutches were all that remained.

In his younger years, he would occasionally climb the fence to hold people back while Moya called the police. He would help rescue crews haul up the bodies of those who couldn't be saved. And he would invite the rescuers back to his house afterward for a comforting drink.

It all nearly cost him his life once. A chilling picture captured decades ago by a local news photographer shows Ritchie struggling with a woman, inches from the edge. The woman is seen trying to launch herself over the side - with Ritchie the only thing between her and the abyss. Had she been successful, he would have gone over, too.

These days, he keeps a safer distance. The council installed security cameras this year and the invention of mobile phones means someone often calls for help before he crosses the street.

But he remains available to lend an ear, though he never tries to counsel, advise or pry. He just gives them a warm smile, asks if they'd like to talk and invites them back to his house for tea. Sometimes, they join him.

"I'm offering them an alternative, really," Ritchie says. "I always act in a friendly manner. I smile."

A smile cannot, of course, save everyone; the motivations behind suicide are too varied. But simple kindness can be surprisingly effective. Mental health professionals tell the story of a note left behind by a man who jumped off San Francisco's Golden Gate Bridge. If one person smiles at me on the way to the bridge, the man wrote, I will not jump.

By offering compassion, Ritchie helps those who are suicidal think beyond the terrible present moment, says psychiatrist Gordon Parker, executive director of the Black Dog Institute, a mood disorder research center that has supported the council's efforts to improve safety at The Gap.

"They often don't want to die, it's more that they want the pain to go away," Parker says. "So anyone that offers kindness or hope has the capacity to help a number of people."

Kevin Hines wishes someone like Ritchie was there the day he jumped off the Golden Gate Bridge in 2000. For 40 agonizing minutes, the then-19-year-old paced the bridge, weeping, and hoping someone would ask him what was wrong. One tourist finally approached - but simply asked him to take her picture. Moments later, he jumped.

Hines, who suffers from bipolar disorder, was severely injured, but eventually recovered. Today he says if one person had shown they were not blind to his pain, he probably would never have jumped.

"A smile can go a long way - caring can go even further. And the fact that he offers them tea and he just listens, he's really all they wanted," Hines says. "He's all a lot of suicidal people want." 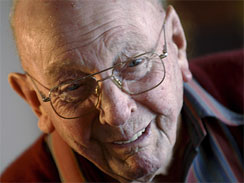 (AP Photo/Jeremy Piper)
In 2006, the government recognized Ritchie's efforts with a Medal of the Order of Australia, among the nation's highest civilian honors. It hangs on his living room wall above a painting of a sunshine someone left in his mailbox. On it is a message calling Ritchie "an angel that walks amongst us."

But he speaks readily and fondly of one woman he saved, who came back to thank him. He spotted her sitting alone one day, her purse already beyond the fence. He invited her to his house to meet Moya and have tea. The couple listened to her problems and shared breakfast with her. Eventually, her mood improved and she drove home.

A couple of months later, she returned with a bottle of champagne. And about once a year, she visits or writes, assuring them she is happy and well.

There have been a few, though, that he could not save. One teenager ignored his coaxings and suddenly jumped. A wind blew the boy's hat into Ritchie's outstretched hand.

He later found out the teen had lived next door, years earlier. His mother brought Ritchie flowers and thanked him for trying. If you couldn't have talked him out of it, she told him, no one could.

Despite all he has seen, he says he is not haunted by the ones who were lost. He cannot remember the first suicide he witnessed, and none have plagued his nightmares. He says he does his best with each person, and if he loses one, he accepts that there was nothing more he could have done.

Nor have he and Moya ever felt burdened by the location of their home.

"I think, 'Isn't it wonderful that we live here and we can help people?'" Moya says, her husband nodding in agreement.

Their life has been a good one, they say. They raised three beautiful daughters and now have three grandchildren to adore. They have traveled the world, and their home is decorated with statues and masks from their journeys. Ritchie proudly points out a dried, shellacked piranha - a souvenir from their vacation to the Amazon, where he insisted on swimming with the creatures (to Moya's dismay).

Until about a year ago, the former Navy seaman enjoyed a busy social life, regularly lunching with friends. But battles with cancer and his advancing years have taken their toll, and now he spends most days at home with Moya, buried in a good book. His current read: the Dalai Lama's "The Art of Happiness."

Every now and then, he looks up from his books to scan the horizon for anyone who might need him. He'll keep doing so, he says, for as long as he's here.

And when he's not?

"I imagine somebody else will come along and do what I've been doing."

He gazes through the glass door to the cliff outside. And his face is lit with a smile.