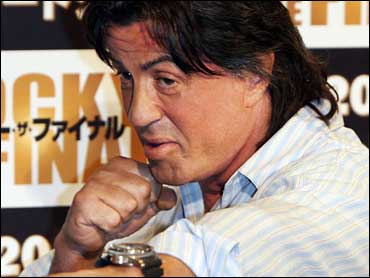 Hollywood star Sylvester Stallone was convicted Monday of bringing dozens of vials of restricted body-boosting hormones into Australia, and ordered to pay nearly $10,690 in fines and costs.

New South Wales state Deputy Chief Magistrate Paul Cloran said the "Rocky" and "Rambo" star failed to show he had a valid prescription for 48 vials of a human growth hormone product, Jintropin, found in his bags when he arrived in Sydney for a promotional tour in February.

The 60-year-old actor also failed to declare four vials of the male hormone testosterone on a customs entry form, although he had legitimate medical reasons for carrying the drug.

Cloran fined Stallone, who was not present in court and last week pleaded guilty, a total of $2,450 on both charges and ordered him to pay prosecution costs of $8,200.

Calls to Stallone's publicist were not immediately returned.

The magistrate said he had given Stallone a reduced penalty, taking into account the actor's written apology and guilty plea last week.

"He has shown contrition, he has expressed his remorse," Cloran said in his judgment. "I don't think there is anything further the court could or should do in order to deter Mr. Stallone from committing these offenses again."

Stallone was charged with two counts of importing a banned substance after a customs search of his luggage at the start of a three-day visit to Sydney revealed 48 vials of Jintropin.

The actor told the customs agents he had bought the drugs at a Los Angeles pharmacy, but that he had forgotten to bring his doctor's prescription to Australia.

Three days later, a customs officer saw him drop four ampules of testosterone from his hotel balcony when customs authorities arrived to search it.

Citing testimony from Stallone's Beverly Hills-based doctor, Robert Huizenga, Cloran found that although he did not have a prescription for the testosterone and failed to declare it to customs officials, he was taking the drug legally under medical supervision.

However, Cloran ruled that Stallone had been "untruthful" about having a prescription for Jintropin, which is not legally available for sale in the United States.

Last week, Stallone wrote a letter to the court apologizing for his "terrible mistake." He said he had been taking the drugs for years to treat an undisclosed medical condition, and that he didn't realize it was illegal to bring them to Australia.

In an interview with customs officials, Stallone said he was carrying such a large amount of the growth hormone drug because he was about to go on location in Thailand and Myanmar — also called Burma — for three months to shoot the latest installment of the "Rambo" series.

"As you get older, the pituitary gland slows and you feel older, your bones narrow. This stuff gives your body a boost and you feel and look good," court documents quoted him as saying. "Doing 'Rambo' is hard work ... Where do you think I am going to get this stuff in Burma?"

Synthetic versions of human growth hormone — a naturally occurring substance produced by the pituitary gland — are available in Australia and the United States by prescription to treat specific medical conditions such as hormone deficiency and stunted growth in children.

The drugs are more widely available in the United States, where proponents say their benefits can range from helping athletes increase muscle mass to restoring energy in the elderly. There is no scientific consensus on the purported benefits.

It is considered a performance-enhancing drug in Australia and cannot be imported without a permit.

The maximum penalty for bringing Jintropin into Australia illegally is a fine of $91,500 and five years in prison.

But Stallone faced a maximum penalty of $18,000 on each of the two charges and no prison time because the matter was heard in a local, not federal, court.