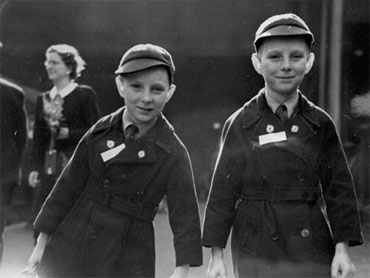 Prime Minister Kevin Rudd issued a historic apology Monday to thousands of impoverished British children shipped to Australia with the promise of a better life. But his government ruled out paying compensation for the abuse and neglect that many suffered.

The British government has estimated 150,000 British children may have been shipped abroad between 1618 and 1967, most from the late 19th century onward. After 1920, most of the children went to Australia through programs run by the government, religious groups and children's charities.

The programs, which ended 40 years ago, were intended to provide the children with a new start - and the Empire with a supply of sturdy white workers. But many children ended up in institutions where they were physically and sexually abused, or were sent to work as farm laborers.

At a ceremony in the Australian capital of Canberra attended by tearful former child migrants, Rudd apologized for his country's role in the migration and extended condolences to the 7,000 survivors of the program who still live in Australia.

"We are sorry," Rudd said. "Sorry that as children you were taken from your families and placed in institutions where so often you were abused. Sorry for the physical suffering, the emotional starvation and the cold absence of love, of tenderness, of care. Sorry for the tragedy - the absolute tragedy - of childhoods lost."

The apology comes one day after the British government said Prime Minister Gordon Brown would apologize for child migrant programs that sent children as young as 3 to Australia, Canada and other former colonies over three and a half centuries. The first group was sent to the Virginia Colony in 1618.

Rudd also apologized to the "forgotten Australians" - children who suffered in state care during the last century. According to a 2004 Australian Senate report, more than 500,000 children were placed in foster homes, orphanages and other institutions during the 20th century. Many were emotionally, physically and sexually abused in state care.

The Australian government has ruled out compensation, saying liability lay with state governments and churches that ran the institutions.

British High Commissioner Valerie Amos said her government had not yet addressed the compensation question.

Ian Thwaites, service manager of the Child Migrants Trust, which has advocated for child migrants in Australia for 22 years, said both the British and Australian governments were liable.

"It takes two governments working closely together to be able to make this mess and break the hearts of thousands of children and families," said Thwaites.

Andrew Murray, a former Australian senator who was a child migrant from Britain to an orphanage in Rhodesia (now Zimbabwe), called on Australia to pay reparations.

John Hennessey, 72, who was born in Bristol, England, and sent to Australia, said he was beaten and sexually abused at a Christian boys home in Western Australia state. He wants compensation from Britain, which he said had deported children to the other side of the world and then abandoned them.

"The apology should have started from England. They were embarrassed and Australia shamed them into it," he added.

The Forgotten Australians also welcomed the apology. Rod Braydon, 65, said he was raped at the age of 6 by a Salvation Army officer on his first night in a boys home in the city of Melbourne.

"When we reported this as kids, we were flogged to within an inch of our lives, locked up in dungeons and isolation cells," said Braydon, who received a cash settlement from the Salvation Army for the abuse and is suing the Victoria state government for neglect.

A 2001 Australian report said between 6,000 and 30,000 children from Britain and Malta, often taken from unmarried mothers or impoverished families, were sent alone to Australia as migrants during the 20th century. Many of the children were told they were orphans, though most had either been abandoned or taken from their families by the state. Siblings were commonly split up once they arrived in Australia.

Authorities believed they were acting in the children's best interests, but the migration also was intended to stop them from being a burden on the British state while supplying the receiving countries with potential workers.

A 1998 British parliamentary inquiry noted "a further motive was racist: the importation of 'good white stock' was seen as a desirable policy objective in the developing British Colonies."

Australia had an immigration policy that favored British and white immigrants until the 1970s.

"We were used as white fodder," Hennessey said. "The Archbishop met us at Fremantle (in Western Australia) and I can still remember his words. He said, 'Welcome to Australia. We want white stock because we're terrified of the yellow peril.'"

British Children's Secretary Ed Balls said the child migrant policy was "a stain on our society."

"I think it is important that we say to the children who are now adults and older people and to their offspring that this is something that we look back on in shame," he said.

Britain has been trying to make amends since the late 1990s by funding trips to reunite migrants with their families in Britain.

Brown's office said officials would consult with representatives of the surviving children before making a formal apology next year.