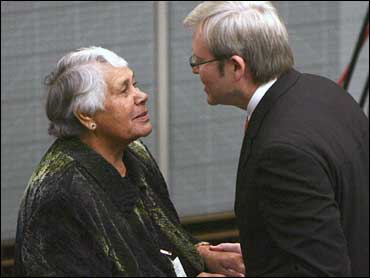 Aborigines organized breakfast barbecues in the Outback, schools held assemblies and giant TV screens went up in state capitals as Australians watched a live broadcast of their government Wednesday apologizing for policies that degraded its indigenous people.

In a historic parliamentary vote that supporters said would open a new chapter in race relations, lawmakers unanimously adopted Prime Minister Kevin Rudd's motion on behalf of all Australians.

"We apologize for the laws and policies of successive parliaments and governments that have inflicted profound grief, suffering and loss on these our fellow Australians," Rudd said in Parliament, reading from the motion.

The apology is directed at tens of thousands of Aborigines who were forcibly taken from their families as children under now abandoned assimilation policies.

"For the pain, suffering and hurt of these Stolen Generations, their descendants and for their families left behind, we say sorry," the motion said. "And for the indignity and degradation thus inflicted on a proud people and a proud culture, we say sorry."

Aborigines remain the country's poorest and most disadvantaged group, and Rudd has made improving their lives one of his government's top priorities.

"This is a historic day," said Tom Calma, who gave the Stolen Generations formal response. "Today our leaders across the political spectrum have chosen dignity, hope and respect as the guiding principles for the relationship with our nation's first people."

In Parliament's public galleries and at gatherings large and small around the country, victims of the assimilation policies and their supporters listened intently as Rudd spoke. Many wept quietly.

Traditional cleansing ceremonies were held in Sydney's predominantly Aboriginal suburb of Redfern before a crowd watched events on a big screen. Parents clutched children on their knees. Many waved Australian and Aboriginal flags.

"Sorry heals the heart and it goes deep," said Rhonda Dixon-Grovenor, an Aborigine among the crowd. "This really means a big thing to us — a weight that can be lifted so that we can start our healing."

The apology ended years of divisive debate and a decade of refusals by the previous conservative government that lost November's elections.

In the Outback town of Broome on the far northwest coast, dozens gathered before dawn to watch the speeches in Canberra on television via a scratchy feed.

"I'm glad it's come this far," local Aborigine Justin Howard told Australian Broadcasting Corp. "But it's not going to stop here, there is still going to be that hurt."

Rudd received a standing ovation from lawmakers and from scores of Aborigines and other dignitaries who were invited to Parliament to witness the event.

"It's great to get behind what the government's trying to do; bring black and white Australians together," said William Murray, 17, one of more than 1,000 who gathered at two giants screens outside Parliament.

"It's really good everyone realizes now they did a bad job in the old days and the apology is really good," Johnson said.

The apology places Australia among a handful of nations that have offered official apologies to oppressed minorities, including Canada's 1998 apology to its native peoples, South Africa's 1992 expression of regret for apartheid and the U.S. Congress' 1988 law apologizing to Japanese-Americans for their internment during World War II.

Aborigines lived mostly as hunter-gatherers for tens of thousands of years before British colonial settlers landed at what is now Sydney in 1788.

Today, there are about 450,000 Aborigines in Australia's population of 21 million. They are the country's poorest group, with the highest rates of jailing, unemployment and illiteracy. Their life expectancy is 17 years shorter than other Australians.

The debate about an apology was spurred by a government inquiry into policies that from 1910 until the 1970s resulted in 100,000 mostly mixed-blood Aboriginal children being taken from their parents under state and federal laws based on a premise that Aborigines were dying out.

Most were deeply traumatized by the loss of their families and culture, the inquiry concluded, naming them the "Stolen Generations." Its 1997 report recommended a formal apology and reparations for the victims.

Rudd ruled out compensation — a stance that helped secure support for the apology among the many Australians who believe they should not be held responsible for past policies, no matter how flawed.

He pledges instead to lift the living standards of all Aborigines, and on Tuesday outlined bold targets for cutting infant mortality, illiteracy and early death rates among indigenous people within a decade.

Aboriginal leaders generally welcomed the apology, though some said it was empty rhetoric without addressing the issue of compensation.

Noel Pearson, a respected Aborigine leader from Queensland state, wrote in The Australian newspaper on Tuesday that offering an apology without compensation meant: "Blackfellas will get the words, the whitefellas keep the money."

Marcia Langton, an Aborigine academic at the University of Melbourne, also said the question of compensation must be addressed, but celebrated the apology as a huge step forward.

Michael Mansell, spokesman for the rights group the National Aboriginal Alliance, said the word "sorry" was one that "Stolen Generation members will be very relieved is finally being used."

Mansell, who has urged the government to establish an $880 million compensation fund, said he still hoped Rudd would be open to the idea.

Tony Abbott, the indigenous affairs spokesman for the main opposition coalition, said his bloc had reversed its previous objection to the apology in part because Rudd promised there would be no compensation.

Among those viewing the parliamentary action on television were more than 60 preschoolers and parents at Australia Street Infant School in Sydney. Karen Donnelly said she wanted her 3-year-old daughter Zara Dennis to watch the apology.

"I want her to be able to reflect later on what happened, and to be a part of history," she said. "It will also be helpful in terms of explaining to her what an apology is, and how we acknowledge our actions when we say sorry."