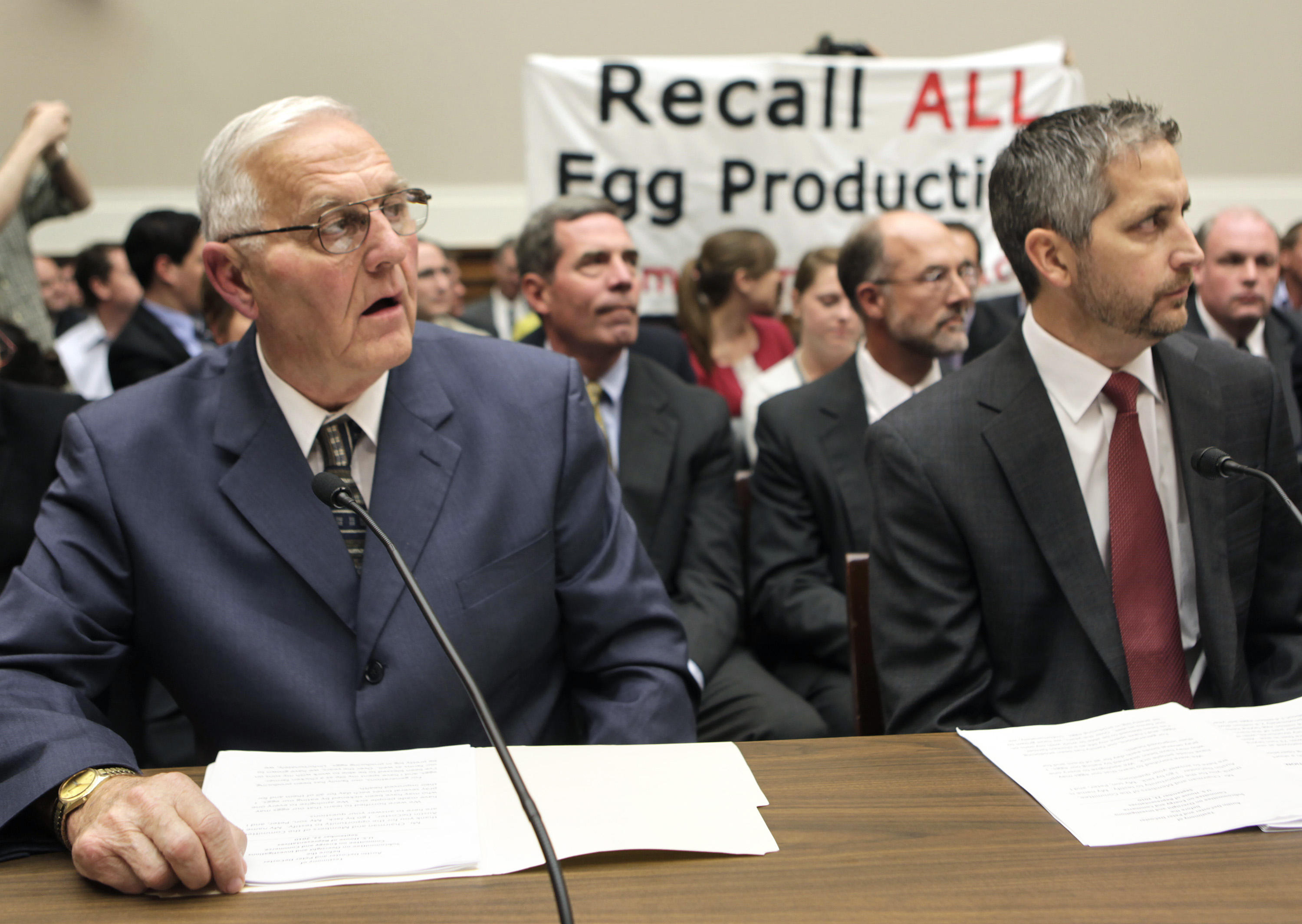 DES MOINES, Iowa -- A father and son whose Iowa-based egg production company caused a massive 2010 salmonella outbreak have exhausted their appeals and a federal judge has ordered them to begin serving prison sentences.

The U.S. Supreme Court declined in May to hear the appeals of Austin "Jack" DeCoster and his son, Peter DeCoster, without comment. Both have been sentenced by U.S. District Judge Mark Bennett to serve three months in prison. The sentences jarred the food and drug manufacturing industry because it's rare that corporate officials are held personally responsible for an outbreak of food-borne illness.

Business groups, including the National Association of Manufacturers, the Pharmaceutical Research and Manufacturers of America and the libertarian Cato Institute think tank filed friend-of-the-court briefs backing the DeCosters' appeal of their sentences. The groups argued that it is unfair to send corporate executives to prison for violations that they were either unaware of or that were committed by subordinates. The groups said it's highly unusual to attach a criminal penalty and prison time to executives when there is no proof of intention or knowledge of wrongdoing.

"This sanction will slow business growth and innovation," said Ilya Shapiro, a senior fellow in constitutional studies at the Cato Institute.

Bennett in his 68-page sentencing opinion filed in April 2015 concluded that prison time was necessary to deter officials from marketing unsafe food.

"Given the defendants' careless oversight and repeated violations of safety standards, there is an increased likelihood that these offenses, or offenses like these, could happen again," he wrote. "The punishment will also serve to effectively deter against the marketing of unsafe foods and widespread harm to public health by similarly situated corporate officials and other executives in the industry."

Last week, Bennett ordered 53-year-old Peter DeCoster to report to the Federal Prison Camp in Yankton, South Dakota, a minimum security facility that is about 200 miles west of his home in Clarion, Iowa. DeCoster must surrender himself to authorities after July 30 when he is notified by the U.S. Bureau of Prisons the facility is ready to receive him.

His 83-year-old father Austin "Jack" DeCoster must serve his three-month term 30 days after Peter is released. He must report to the Federal Correctional Institution in Berlin, New Hampshire, a location Bennett approved at DeCoster's request.

DeCoster, who says he has several medical issues including prostate cancer, has moved from Iowa to Maine and the medium-security prison camp is about 70 miles from his home.

The DeCosters, who have already paid $100,000 each in criminal penalties, also owe $83,000 in restitution, according to court documents.

The DeCosters, who owned and operated Quality Egg LLC, pleaded guilty to violating the law by selling adulterated food as responsible corporate officers. They said they didn't know the eggs were contaminated but acknowledged they were in a position to stop the problems had they known.

United States Department of Agriculture (USDA) sanitation reports from the packing facility at Wright County Egg farm in Iowa show inspectors noted the presence of bugs 30 times in the three months leading up to the salmonella outbreak.

The U.S. Centers for Disease Control and Prevention has estimated that as many as 56,000 people were sickened by the eggs and some consumers were left with permanent injuries.

Quality Egg paid a $6.8 million fine after pleading guilty to felony charges of shipping eggs with false processing and expiration dates and bribing a USDA inspector to approve sales of poor-quality eggs.