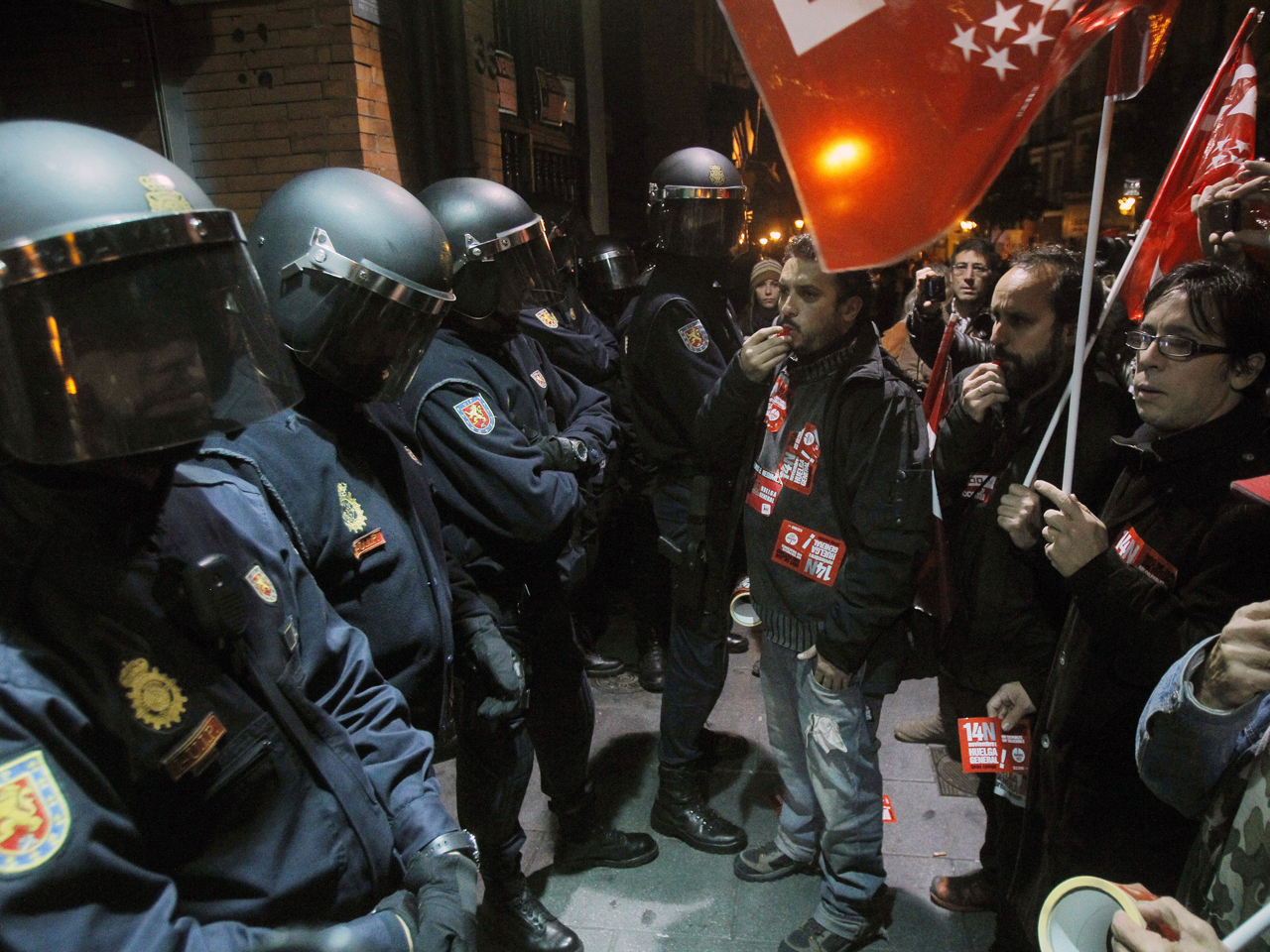 BRUSSELS Hundreds of thousands of Europe's beleaguered citizens went on strike or snarled the streets of several capitals Wednesday, at times clashing with riot police, as they demanded that governments stop cutting benefits and create more jobs.

Workers with jobs and without spoke of a "social emergency" crippling the world's largest economic bloc, a union of 27 nations and half a billion people.

The protests were met with tear gas in Italy and Spain, but were largely limited to the countries hardest hit by the austerity measures designed to bring government spending into line with revenues. Wealthier nations like Germany, the Netherlands and Denmark saw only small, sedate demonstrations.

Governments backing the line of stringent austerity were not impressed by the show of force.

`'We must nevertheless do what is necessary: break open encrusted labor markets, give more people a chance to work, become more flexible in many areas," German Chancellor Angela Merkel said. `'We will of course make this clear, again and again, in talks with the unions."

Spanish Economy Minister Luis de Guindos spoke of "a long crisis that has meant sacrifice and uncertainty," but said: "The government is convinced that the path we have taken is the only possible way out."

To combat a three-year financial crisis over too much sovereign debt, governments across Europe have had to raise taxes and cut spending, pensions and benefits. As well as hitting workers' incomes and living standards, these measures have also led to a decline in economic output and a sharp increase in unemployment.

The zone of the 17 countries that use the euro currency is expected to fall into recession when official figures are released Thursday. Unemployment across those countries has reached a record 11.6 percent, with Spain and Greece seeing levels above 25 percent.

With no end in sight to Europe's economic hardship, workers were trying to take a stand on Wednesday.

`'There is a social emergency in the south," said Bernadette Segol, secretary general of the European Trade Union Confederation. `'All recognize that the policies carried out now are unfair and not working."

Spain's General Workers' Union said the nationwide strike -- the second this year -- was being observed by nearly all workers in the automobile, energy, shipbuilding and construction industries. The country, reeling from austerity measures designed to prevent it from asking for a full-blown international bailout, is mired in recession with 50 percent unemployment among its under-25s.

Ignacio Fernandez Toxo, a CCOO Spanish union leader, called Wednesday's actions "a political strike against the policies of a suicidal and anti-social government."

The Spanish strike shut down most schools, and hospitals operated with skeleton staffs. Health and education have both suffered serious spending cutbacks and increased moves toward privatization.

Frustration spilled into violence when riot police clashed with demonstrators in Madrid and other Spanish cities.

In the late afternoon, tens of thousands filled the downtown streets of Madrid, Barcelona, Valencia and other cities, though officials and organizers gave differing turnout figures. The Interior Ministry said there were 35,000 in central Madrid, but unions said there 350,000. In Barcelona, organizers claimed more than 1 million turned out. Authorities there said it was around 50,000.

By early evening, 118 people had been arrested and 74 people, including 43 police, injured.

In Italy, protests turned violent as well, with some of the tens of thousands of students and workers clashing with riot police in several cities. Dozens of demonstrators were detained and a handful of police were injured, according to Italian news reports.

In bailed-out Portugal, where the government intends to intensify austerity measures next year, the second general strike in eight months left commuters stranded as trains ground to a virtual halt and the Lisbon subway shut down. Some 200 flights to and from Portugal -- about half the daily average -- were canceled. Hospitals provided only minimum services and municipal trash was left uncollected.

Protest marches in 40 Portuguese cities reportedly were peaceful but as night fell a small group of protesters threw rocks and bottles at riot police protecting the parliament building in Lisbon. A police charge dispersed the protesters who fled into narrow side-streets and set fire to trash cans. At least five people were injured.

Airports across Europe were forced to cancel flights to and from striking nations.

`'If you start striking at national level and in companies you only will harm the economy," he said. `'And it is not the right thing to do today."

Europe has a long history of union action, and workers' rights and benefits have been one of the cornerstones of its welfare state, with its guaranteed medical care, generous unemployment benefits and often comfortable pensions.

The union action was not felt across the entire region, however, with countries where austerity has not hit as hard experiencing little disruption.

In Austria, which has the eurozone's lowest unemployment at 4.3 percent, only about 350 people gathered in a central square in Vienna to express solidarity with Greece. Many danced a sirtaki, Greece's traditional dance.

"So far, there are only symbolic demonstrations here in Germany, because we were able to avoid the crisis," said Michael Sommer, the head of Germany's main labor union federation.

In Denmark, too, there were no strikes, since cooperation between workers and employers has largely survived the crisis.

`'The employers speak the same language as we do and we understand each other's needs and demands," said Joergen Frederiksen, a 69-year-old retired worker and former shop steward. `'There are good vibes between us and that means a lot."