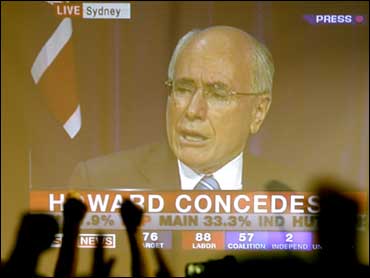 Conservative Prime Minister John Howard suffered a humiliating defeat Saturday at the hands of the left-leaning opposition, whose leader has promised to immediately sign the Kyoto Protocol on global warming and withdraw Australia's combat troops from Iraq.

Labor Party head Kevin Rudd's pledges on global warming and Iraq move Australia sharply away from policies that had made Howard one of President Bush's staunchest allies.

Rudd has named global warming as his top priority, and his signing of the Kyoto Protocol will leave the U.S. as the only industrialized country not to have joined it.

Rudd said he would withdraw Australia's 550 combat troops from Iraq, leaving twice that number in mostly security roles. Howard had said all the troops will stay as long as needed.

Official figures from the Australian Electoral Commission showed Labor far in front after more than 70 percent of the ballots had been counted - with 53 percent of the vote compared to 46.7 percent for Howard's coalition.

Using those figures, an Australian Broadcasting Corp. analysis showed that Labor would get at least 81 places in the 150-seat lower house of Parliament - a clear majority.

It was an embarrassing end to the career of Howard, Australia's second-longest serving leader.

As little as a year ago, Howard had appeared almost unassailable. But on Saturday he was in real danger of becoming only the second sitting prime minister in 106 years of federal government to lose his own seat in Parliament.

Howard took full blame for the drubbing handed to his center-right coalition.

A new government is unlikely to mean a fundamental change in Australia's close alliance with the United States - its most important security partner - or its growing economic and political ties with Asia.

At home, Rudd has pledged to govern as an "economic conservative," while pouring money into schools and universities. He will curtail sweeping industrial reforms laws that were perceived to hand bosses too much power, turning many working voters against Howard.

"Today Australia has looked to the future," Rudd said in a nationally televised victory speech, to wild cheers from supporters. "Today the Australian people have decided that we as a nation will move forward ... to embrace the future, together to write a new page in our nation's history."

In his concession speech, Howard announced he had phoned Rudd to congratulate him on "a very emphatic victory."

The change from Howard to Rudd also marks a generational shift for Australia.

Rudd, a 50-year-old former diplomat who speaks fluent Chinese, urged voters to support him because Howard, 68, was out of touch with modern Australia and ill-equipped to deal with new-age issues such as climate change.

Howard campaigned on his economic management, arguing that his government was mostly responsible for 17 years of unbroken growth, fueled by China's and India's hunger for Australia's coal and other minerals, and that Rudd could not be trusted to maintain prosperous times.

Labor has been out of power for more than a decade, and few in Rudd's team - including him - has any government experience at federal level. His team includes a former rock star - Midnight Oil singer Peter Garrett - a television journalist and former union officials.

But analysts say his foreign policy credentials are impeccable, and that he has shown discipline and political skill since his election as Labor leader 11 months ago.

Rudd's election as Labor leader marked the start of Howard's decline in opinion polls, from which he never recovered.

Howard's four straight election victories since 1996 made him one of Australia's most successful politicians. He refused to stand down before this election - even after being urged to do by some party colleagues.

Now, Australia's second-longest serving prime minister and a leading figure in Australian politics for more than 30 years, has conceded that he was "very likely" to lose his home district of Bennelong.

With more than 75 percent of votes counted in Bennelong, Howard trailed his rival Maxine McKew by a narrow margin. A handful of absentee ballots and preferences from minor parties will decide his fate as the district's parliamentary representative, which was not immediately known Saturday night.

However, minutes after conceding defeat to Rudd in the national election, Howard told supporters in Sydney it appeared "very likely to be the case that I will no longer be the member for Bennelong."

"But whatever ultimately is the situation, I do want to thank the people of Bennelong who have done me the honor of electing me to represent them in the national Parliament for some 33 years," Howard said.

A loss in Bennelong would mark a mortifying end to Howard's political career, making him only the second prime minister to be dumped from the legislature. The first was the largely forgotten Stanley Bruce, in 1929.

McKew, a charismatic former television journalist recruited to oust the 68-year leader, declined to claim victory as the results rolled in, saying the count was still "on a knife edge."

"The result is not clear, but what a wonderful, wonderful campaign this has been," she told throngs of cheering supporters at her campaign headquarters. "Bennelong will never, ever be taken for granted again."

Formerly a safe area for Howard's Liberal Party, Bennelong has seen its loyalties gradually shift over the years as immigration and redistricting have changed the face of the electorate there.

Once a typical cross-section of Anglo-Saxon Australia, Bennelong is now a multicultural mix of Presbyterian churches, Indian supermarkets and Vietnamese noodle houses.

According to census bureau statistics, only 56 percent of Bennelong residents were born in Australia, compared to the national average of 71 percent. A language other than English is spoken in more than two-thirds of Bennelong homes.

Immigrants in Australia are generally Labor voters. Before the election, Howard was the only Liberal Party member to hold a district with that level of ethnic diversity.