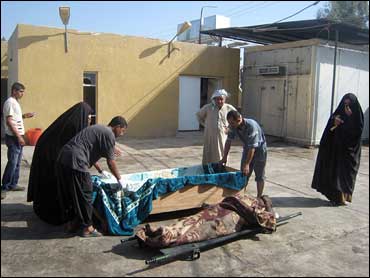 Civilian deaths rose slightly in August from July's figure as a huge suicide attack in the north two weeks ago offset security gains elsewhere, according to figures compiled Saturday by The Associated Press.

At least 1,809 civilians were killed in the month, compared to 1,760 in July, based on figures compiled by the AP from official Iraqi reports. That brings to 27,564 the number of Iraqi civilians killed since AP began collecting data on April 28, 2005.

The August total included 520 people killed in quadruple suicide bombings on Yazidi communities near the Syrian border. The horrific attacks made Aug. 14 was the single deadliest day since the war began in March 2003.

Eighty-five coalition troops - 81 American and four British - died in August, down from 88 the month before, including 79 Americans. The average rate of 2.74 coalition deaths per day was the second lowest since the surge began, and down from a peak of 4.23 per day in May.

U.S. officials have maintained that violence is declining in Iraq in the run-up to a series of reports to Congress this month that will decide the course of the U.S. military presence here.

The top U.S. commander, Gen. David Petraeus, was quoted Friday as saying the troop increase has sharply reduced sectarian killings in Baghdad. Petraeus is expected to make the same point when he reports to Congress in about two weeks.

"If you look at Baghdad, which is hugely important because it is the center of everything in Iraq, you can see the density plot on ethno-sectarian deaths," the Australian newspaper quoted him as saying during an interview in the Iraqi capital.

"It's a bit macabre but some areas were literally on fire with hundreds of bodies every week and a total of 2,100 in the month of December '06, Iraq-wide. It is still much too high but we think in August in Baghdad it will be as little as one quarter of what it was," the newspaper quoted Petraeus, who gave no specific figures.

American hopes brightened this week when the most powerful Shiite militia leader, Muqtada al-Sadr, ordered a halt to attacks by his Mahdi Army for up to six months to reorganize and purge it of unruly factions that the U.S. maintains are armed and trained by Iran.

"If implemented, Sadr's order holds the prospect of allowing coalition and Iraqi security forces to intensify their focus on al Qaeda-Iraq and on protecting the Iraqi population," the U.S. military said in a statement Saturday.

The statement said an end to Mahdi Army violence "would also be an important step in helping Iraqi authorities focus greater attention on achieving the political and economic solutions necessary for progress and less on dealing with criminal activity, sectarian violence, kidnappings, assassinations, and attacks on Iraqi and coalition forces."

Despite those comments, U.S. and Iraqi forces have not let up on raids against extremists in Shiite areas.

Before daybreak Saturday, Iraqi and American forces raided Sadr City, the Baghdad stronghold of the Mahdi Army, detaining eight people and demolishing several cars with tanks, according to a police officer speaking on condition of anonymity. Associated Press Television News video from the scene showed several crushed cars on the street.

The U.S. military did not respond to a request for information on the raid. American commanders routinely refer to extremists targeted in raids as "rogue elements," implying they may be beyond al-Sadr's control.

Leaflets scattered around Sadr City urged people to report on Shiite militants who are cooperating with the Iranians, providing a cell phone number and a yahoo.com e-mail address.

Armed Shiite groups are locked in a struggle for power in Shiite areas of the capital and in the Shiite heartland of the south, which includes major religious shrines and vast oil wealth. Control of the shrines offers not only prestige but access to huge sums of money donated by Shiites from around the world.

As part of that power struggle, gunmen on a motorcycle assassinated Muslim al-Batat, an aide to the country's top Shiite cleric, Grand Ayatollah Ali al-Sistani, police said. The attack occurred in Basra, where numerous militias are competing for power.