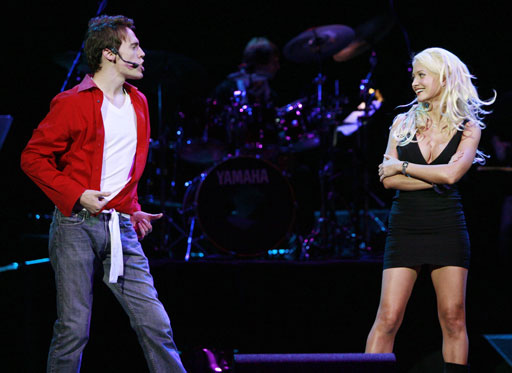 Audrey Hepburn fans got a sneak peak Tuesday of dozens of garments and personal effects once belonging to the movie star that will hit the auction blocks next week.

A Givenchy black lace dress that Hepburn wore in "How to Steal a Million" and a demure ivory wedding gown that never made it down the aisle are among the items.

The fans, fashionistas and those looking to score a slice of film history were given the preview of the collection in Paris before the Dec. 8 sale in London.

"For her, what was important was not decoration and lots of embellishment. She liked very simple things - less was always more for Audrey," said auctioneer Kerry Taylor, whose eponymous auction house is handling the sale.

Star lots include an Yves Saint Laurent empire waisted gown in white cotton that she wore to her son Luca's 1970 christening, estimated at 2,485-$4,141, and an abbreviated, long-sleeve Valentino Haute Couture dress in ivory silk and lace that's identical to the one worn by Jacqueline Kennedy at her 1968 wedding to Aristotle Onasis.

Another ivory wedding gown, made for Hepburn by the Rome-based Fontana sisters, is expected to fetch 8,000-12,000 pounds - though Hepburn herself didn't wear it down the aisle. After her marriage to James Hanson, which was scheduled for 1952, was called off, Hepburn asked that the Fontana sisters give it "to someone who could never afford a dress like mine, the most beautiful, poor Italian girl you can find," the auction catalog quotes Hepburn as saying.

And then there's the Givenchy: pared-down cocktail dresses, buttery silk tops, ladylike coats and dramatic sweeping gowns made by legendary French couturier for Hepburn, his muse.

"She said of Hubert de Givenchy that he was her greatest friend and he said of her that it was a real romance between the two, a real love affair that lasted all their lives," Taylor told The Associated Press at Sotheby's Paris showroom, where the two-day-long preview was held.

A Givenchy cocktail dress and cropped jacket made from black lace - which Hepburn wore in the 1966 romantic comedy "How to Steal a Million," costarring Peter O'Toole - is expected to fetch the sale's highest price of between 15,000-20,000 pounds - though auctioneer Taylor acknowledges the estimates are very approximate.

She said that clothes having once belonged to Hepburn, who died in 1993, rarely come to auction and the last two pieces fetched a whopping $1 million.

"These are harder times, and I've tried to keep my feet on the ground," she said, adding that lots start at an estimated 250 pounds for a straw hat. Another headpiece, a domed hat by Givenchy in green velvet with dangling beaded and feathered tassels, was featured in a 1964 Vogue shoot, and is estimated at 800-1,200 pounds.

Most of the lots come from the closets of Tanja Star-Busmann, a longtime friend of the actress. The two met in London when Tanja was 15 years old and Hepburn 20 - just before her career took off.

"I was perhaps her first unofficial fan - writing letters to her from boarding school and receiving replies," Star-Busmann, who is now in her 70s, wrote in the auction catalog. In addition to letters - some of which are to be sold - Hepburn also regularly gave her young confidant her hand-me-downs, which became increasingly fabulous as her star rose.

"Over the years, a cavalcade of boxes filled to the brim ... arrived at my door," wrote Star-Busmann. "Unpacking them was always like Christmas all over."

One of the pieces, a white point d'esprit bustier dress Hepburn wore in the 1956 movie "Love in the Afternoon," came shortly after Star-Busmann gave birth to a daughter. Enclosed with the frothy tulle was a note reading "just so you know what it's like to have a waist again," the catalog said.

After she recovered her figure, Star-Busman passed the dress on to her nanny, who - not having Hepburn's wasp-thin figure - had it enlarged using two panels down the back.

"Mr. Givenchy saw it yesterday and was really upset at the condition," said Taylor. "I understand him. I went ahead and put it into the auction because I thought that with lots of love and care, it could be restored."

A better-preserved version of the same dress in black - Hepburn was in the habit of acquiring her favorite dresses in both shades - is also to be auctioned.

Highlights are on display at Sotheby's in Paris through Wednesday. Half the proceeds from the sale are to go to the Audrey Hepburn Children's Fund and UNICEF.