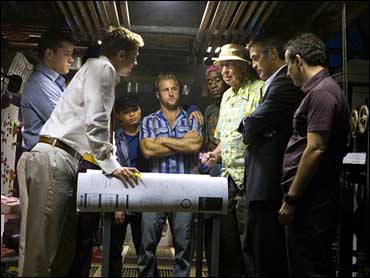 Audiences anted up for the Warner Bros. caper "Ocean's Thirteen," the third of George Clooney and Brad Pitt's casino-heist romps, which debuted as the top flick with $37.1 million, according to studio estimates Sunday.

Disney's "Pirates of the Caribbean: At World's End," the No. 1 movie the previous two weekends, sank to second-place with $21.3 million, raising its domestic total to $253.6 million.

Sony's "Surf's Up," an animated adventure about surfing penguins featuring the voices of Shia LaBeouf and Jeff Bridges, debuted in fourth-place with $18 million. That was less than half the $41.5 million opening weekend of last fall's animated-penguin hit "Happy Feet."

"Surf's Up" earned good reviews, but audiences may have viewed it as a retread of "Happy Feet," which finished with nearly $200 million domestically and won the Academy Award for best animated feature.

Lionsgate's gory horror sequel "Hostel: Part II," about rich people who pay to kill victims in grisly ways, opened at No. 6 with $8.75 million, less than half the $19.6 million debut of last year's "Hostel."

The three blockbusters that debuted in May — "Pirates of the Caribbean," DreamWorks Animation's "Shrek the Third" and Sony's "Spider-Man 3" — all have trailed off with big drops in revenue after huge first weekends.

Collectively, the three movies will combine for about $1 billion in domestic receipts. But all three will finish well below the $400-million-plus haul each of their most-successful predecessors took in.

The latest installments on all three franchises earned mixed reviews, and they arrived amid arguably the most-competitive summer ever for Hollywood, with huge sequels and other big films arriving every weekend.

With "Spider-Man 3" edging toward $900 million worldwide and "At World's End" nearing $750 million, overseas revenues have far exceeded domestic receipts for both franchises. "Shrek the Third" is rolling out overseas gradually.

"It's really become an opening-weekend business, but with all the competition, in the long haul, they just don't have the legs that their predecessors did," said Paul Dergarabedian, president of box-office tracker Media By Numbers. "Studios really have to rely on those worldwide grosses to make up the difference in the long run."

An exception is Universal's comedy "Knocked Up," which held up strongly in its second weekend with $20 million, coming in at No. 3 and raising its domestic total to $66.2 million. Critical praise and audience word of mouth sustained the film, which stars Katherine Heigl as a career woman who becomes pregnant from a one-night stand with a slacker (Seth Rogen).

"Ocean's Thirteen" reunites director Steven Soderbergh with Clooney, Pitt, Matt Damon and other cast members as the gang of thieves targets a casino owner (Al Pacino) who double-crossed one of their own.