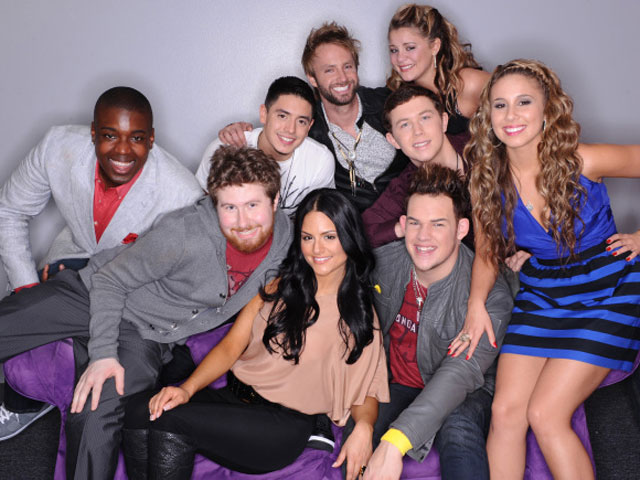 (CBS/AP) Looks as if  Pia Toscano's elimination isn't the only controversy surrounding "American Idol" - a 19-year-old audience member claims that she was barred from a front-row seat and told it was because of her weight, an allegation denied by the show's production company.

The allegations are "simply untrue," said Manfred Westphal, a spokesman for producer FremantleMedia North America. He admitted that Ashley Kauffman, of Riverside, Calif., complained to an audience coordinator at last Thursday's show that she was separated from her friends who sat in the front row, but he denied that she was told it was because of her weight.

According to a FremantleMedia statement, Kauffman and five other friends were among the first to arrive for the show and were told that there were "six great seats" available, three in one row and three in another.

Kauffman was a guest of a Riverside high school dance troupe. It has attended previous telecasts of the Fox show and received choice seats because of its enthusiasm for "Idol," Westphal added.

The group agreed to split up and Kauffman "did not sit alone or in the back of the house" as she alleged, FremantleMedia said.

"In fact, she and her remaining party were seated just four rows behind their friends, directly in camera shot, in some of the best seats in the house."

Kauffman was in a row that included a VIP guest of judge Steven Tyler, Westphal said. They were a few rows behind the judge's table in a spot that has been featured on camera before, he added.

Attempts to reach Kauffman, including a message left at a phone number listed in her father's name, were unsuccessful Tuesday.

But Kauffman repeatedly told other audience members that a male studio employee had told her she was moved back because she was fat and couldn't sit up front with the "skinny girls."

When Kauffman subsequently complained online about her experience at the show, the audience coordinator who initially booked her group contacted Kauffman to discuss what had happened, Westphal said.

The coordinator told her there was no bias, that people of all "ages, shapes and sizes" sit in the front row all the time, and that Kauffman simply was being seated according to her ticket for the fifth row of the floor section, he said.

Hannah Solarzano, 19, said Tuesday that she was part of Kauffman's dance group, which traveled from suburban Riverside to Los Angeles for the show but hadn't met her before that night.

Solarzano said she was seated next to Kauffman and didn't hear any insults being directed at her.

"Nobody started talking about the comment that was supposedly made to Ashley until she brought it up," Solarzano said. "I never heard those words except from her."

While she couldn't support Kauffman's account, Solarzano said, it obviously stings to be labeled as overweight.

"You don't call a girl `fat,' ever. It's code," Solarzano said. "I understand how upsetting that can be. But, c'mon, honey, it's `American Idol.' You've got to move on from there. Big deal."

Solarzano recounted that she herself was singled out by a studio employee and told she couldn't sit in the front row because she was wearing shorts. Others in the group were taken aback, with one saying, "Oh my God, did you hear how she said that to you?" Solarzano said.

It worked out fine, she said. "I was three people away from Steven Tyler, so I wasn't complaining."

It's not unusual for cute young things to be seen gathered in a sort of "mosh pit" near the stage, gazing adoringly up at their favored contestant. This happened last week with deep-voiced country singer Scotty McCreery, 17, of Garner, N.C.,  swarmed on-stage by female admirers.

But, like most reality shows, the "Idol" audience and contestants generally have reflected American diversity, including when it comes to size.

An examination of a recording of the episode attended by Kauffman showed that it opened with a sweeping camera shot that included a cross-section of audience members, including some who could be characterized as plus-size.

The episode also generated controversy over the shocking eliminationof Pia Toscano, 22, of New York City, one that prompted tears from Jennifer Lopez and a Randy Jackson warning that "no one is safe" in the contest.

"American Idol," in its 10th season, is TV's top-rated series.