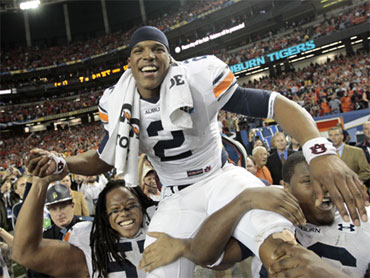 Cam Newton left nothing to chance. He ran and passed the Auburn Tigers to a shot at the national championship they were denied six years ago, and he might as well start working on that Heisman pose, too.

Newton passed for a career-high 335 yards and four touchdowns, plus ran for a pair of TDs in an MVP performance that led No. 2 Auburn to the Southeastern Conference championship with a 56-17 rout of Steve Spurrier and No. 18 South Carolina on Saturday.

The Tigers, who came into the day sitting atop the Bowl Championship Series standings, must wait 24 hours before getting the official word, but it's nothing more than a formality: They'll be playing Oregon for the national title on Jan. 10 in Glendale, Ariz.

The No. 1 Ducks beat Oregon State 37-20 to assure the unbeaten matchup, which denied another perfect team, TCU, a shot at becoming the first team from a non-BCS conference to play for the title.

Before the national title is decided, Newton will likely be picking up the college game's top individual honor when the Heisman Trophy is awarded next weekend in New York City — especially since he was cleared of wrongdoing by the NCAA in a pay-for-play scandal.

Hard to imagine the vote even being close after the 6-foot-6, 250-pound junior followed Tim Tebow as only the second player in the history of the top division to run AND pass for 20 touchdowns in a season. He slipped away from defenders with his surprising quickness, buying extra time to throw. He broke tackles with his power, not at all shocking given that he outweighed all three of South Carolina's starting linebackers by at least 25 pounds.

Or he just ran right over 'em.

Newton guided the Tigers (13-0) to touchdowns on their first three possessions, though South Carolina (9-4) was in the game as halftime approached. Trailing only 21-14, the Gamecocks simply had to knock down Newton's last-gasp pass on the final play before the break.

They couldn't even do that.

Newton heaved one up and DeVonte Holloman, standing in front of Terrell Zachery, leaped to tip it away. But the deflected ball went right to Darvin Adams for an improbable 51-yard touchdown that changed the complexion of the game. After South Carolina missed a field goal on the first possession of the second half, it was all Tigers.

Maybe there's a bit of karma in how things worked out.

While many will surely consider any title to be tainted because of Newton's father seeking out illegal payments during the recruiting process, the Tigers can counter that this makes up for the 2004 season.

Auburn went 13-0 that year but didn't get a chance to even play for the national title. Instead, USC and Oklahoma met in the Orange Bowl, with the Trojans winning in a 55-19 romp.

This game was nearly as lopsided. In the second half, Newton ran right over Antonio Allen on a 1-yard touchdown, sending the linebacker tumbling onto his back to make it 35-14. The Auburn star finished his day with a nifty little 7-yard scoring pass to Emory Blake in the right corner of the end zone for a 49-14 lead.

Well, there was one more snap to take.

Newton was sent out only so he could come right back off to a fitting ovation for the Auburn side of the Georgia Dome. He waved his arms, pumped his fists and was wrapped up in a big hug from coach Gene Chizik when he got to the sideline. Then he yucked it up with 1985 Heisman winner Bo Jackson, who watched the game standing on the Tigers bench. 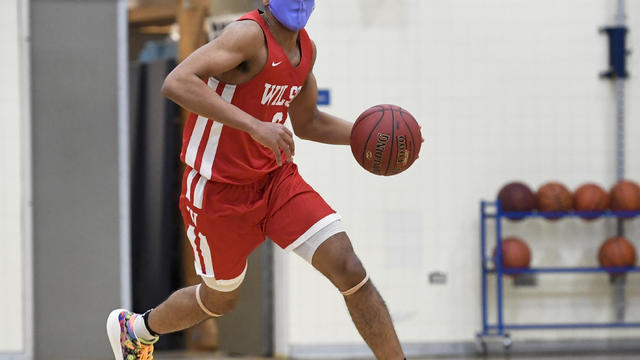 Sports content company is creating a teen basketball league that guarantees a six-figure salary to every player. 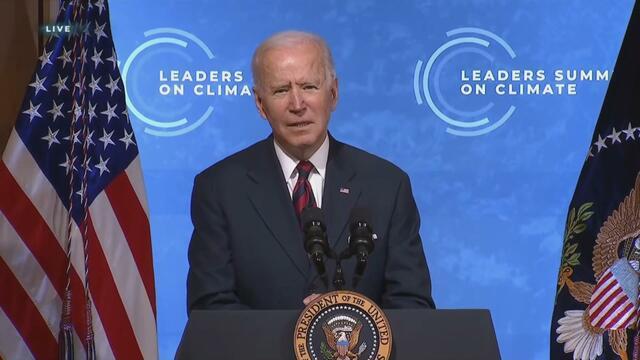 President Biden is making a new pledge to cut U.S. greenhouse gas emissions as he tries to put the country back at the center of global climate policy. CBS News senior national and environmental correspondent Ben Tracy, Politico White House correspondent Natasha Korecki and NPR political reporter Juana Summers spoke with Caitlin Huey-Burns on "Red & Blue" about how the government plans to reach the goal and what comes next.