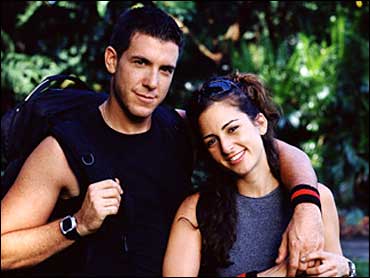 Aaron and Arianne have been dodging the elimination bullet for a few weeks now. They left the Pit Stop this week mired in last place and just could never get close enough to any of the other teams to advance.

"We saw that coming from a mile away. We spent most of the day just sort of trying to catch up, and it didn't seem like it was really going to ever happen," says Arianne on The Early Show

"We knew in the morning that that was what was going to happen. It wasn't a surprise ending," adds Aaron.

Yet they definitely kept a positive attitude, hoping against hope they'd find a way to leapfrog out of the cellar.

"We always had a good time. It was the least stressful of all of the days on the race because we were so far behind. There wasn't much we could do. There wasn't a lot of pressure on us. We just went through the motions. We ran a good leg. But there was no opportunity to catch up," says Aaron.

So was the experience as good as they had anticipated?

"It was better," says Arianne. "I mean, it was exactly what I wanted it to be. I mean, I got to go on a trip around the world with my best friend. It was amazing."

The two have been friends for 15 years and they say they looked to the experience as a way to share a good time. The prize money was not the goal, says Aaaron. Nevertheless, he adds, "It would have been nice to have half a million dollars each."

Aaron and Arianne, who met at the Florida Academy of Dramatic Arts, shared a lot of drama as they encountered several obstacles in the race. Probably what started it all was putting the wrong kind of fuel in the car while they were in Portugal.

"It was really nice to know that four of the eight teams made the same mistake as we did. Because when you're in the middle of it, you're thinking that you're the only person who would have made such a foolish error," says Arianne.

While waiting for a replacement vehicle, they were stranded in the middle of nowhere. Partially out of being afraid, Aaron says, they decided to take a cab, which was against the rules. Along with Heather and Eve, they were given a 70-minute penalty for not following directions.

The two say they made alliances and friends that would last a lifetime. But there were also people in the race they were not too keen on.

"There was a bad rap about the twins. As you notice, we were in cahoots with three of the other teams who all felt similarly about the twins," says Arianne.

So what was the deal with the twins?

"It was more a political platform. We really like Derek and Drew a lot. They're the nicest guys you'll ever meet. We just didn't want another team of, you know, white guys, strong alpha males to win," says Aaron.
But they did say there was a team they were not comfortable to race with.

"Terry and Ian at times. I didn't like the way he treated her. You could see in our relationship that we had a lot of respect for each other. And I don't think they had a lot for one another," says Aaron.

Now that the race is over, the best friends agree they had a good run and plan to continue to have a good time.

"You've not seen the last of us," says Arianne.