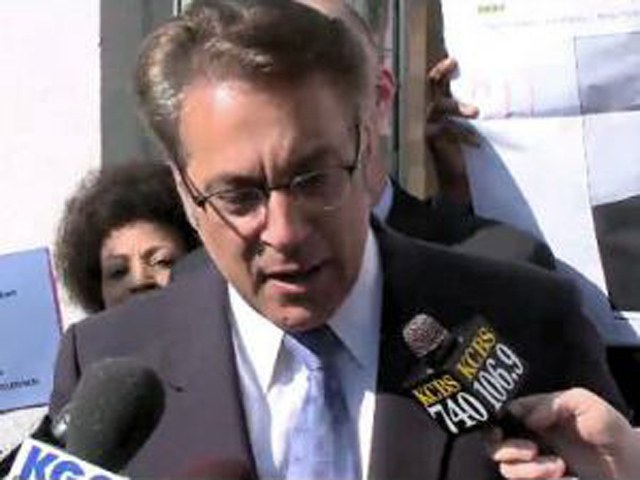 (CBS/AP) SAN FRANCISCO - Attorneys for San Francisco Sheriff Ross Mirkarimi moved Wednesday to exclude a video and other key prosecution evidence in the domestic violence case against him.

During a pre-trial hearing Wednesday, Mirkarimi's lawyers argued that a video supposedly showing his wife, Eliana Lopez, describing how he had allegedly bruised her on New Year's Eve should be inadmissible.

Lopez said it was the second time Mirkarimi had abused her, and cited an incident that another neighbor told authorities allegedly occurred in March 2011.

Attorney Lidia Stiglich said the video and the accounts of what two neighbors said Lopez had told them should be considered hearsay.

The San Francisco Chronicle reports Mirkarimi, 50, made a brief appearance Wednesday in San Francisco Superior Court in advance of his trial on charges of misdemeanor domestic violence battery. Outside court, he said he was "looking forward to getting this past us."

However, prosecutors are seeking to put a former girlfriend of Mirkarimi's, Christina Flores, on the stand and use her testimony to show a pattern of what she describes as "abusive behavior" by Mirkarimi.

The prosecution and defense motions will be ruled on by the trial judge, who is to be assigned to the case Friday. Jury selection could begin within days.