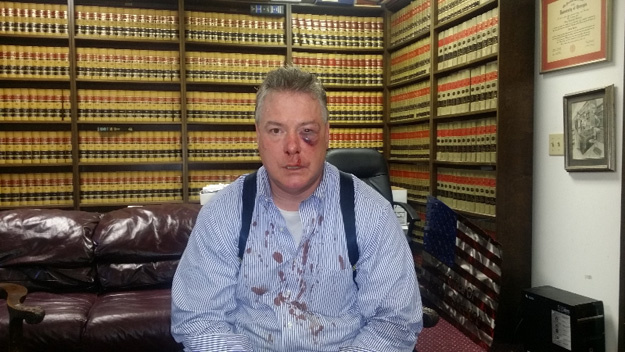 SANTA ANA -- A defense attorney says he was shaken up Wednesday after an argument on the tenth floor of a courthouse in Santa Ana turned physical, CBS Los Angeles reports.

"He made some obnoxious comment about, 'Defense attorneys can't be trusted and are sleazy,'" said James Crawford, who says that that's how the incident started. He claims the incident ended with his face slammed into a courthouse bench with punches flying.

His eye is now black and blue and swollen shut. He alleges that the man responsible is an investigator with the Orange County District Attorney's office.

"You're supposed to have trust in law enforcement and here they are overreaching, going over the edge, abusing their authority," said Crawford.

Crawford went straight to his own attorney's office with a bloodied shirt after the incident played out inside the courthouse earlier in the day. A juror in an unrelated case snapped a photo of blood on the tenth floor.

The Orange County Sheriff's Department says no one has been arrested but they are still investigating.

When asked if he threw a punch, Crawford replied: "no, not at all."

Crawford has called out the D.A.'s office before.

Two weeks ago, he helped secure a new trial for a murder suspect, arguing that the D.A.'s office illegally used informants.

When asked if he thought his involvement was somehow related to the brawl, he replied: "I could only guess. I don't know what he was thinking."

The investigator accused in the incident hasn't said much, but the Orange County District Attorney's office released the following statement:

"The Orange County District Attorney's Office (ODCA) is fully cooperating with the Orange County Sheriff's Department (OCSD) as they continue to investigate the incident this morning, March 9, 2016, at the Central Justice Center between an OCDA Investigator and a court-appointed private attorney. When the investigation is complete, the matter will be referred to the California Attorney General's Office for a legal review."

"There were many independent bystanders in the hallway who witnessed exactly what happened in the courthouse. Criminal defense attorney James Crawford's one-sided version is simply not true. A careful investigation will reveal the true facts. We are cooperating fully in that investigation and we look forward to the actual facts being released publicly."

But Crawford isn't waiting for criminal charges. He says he plans to sue to county.

"He should resign. He is not law enforcement," Crawford said.