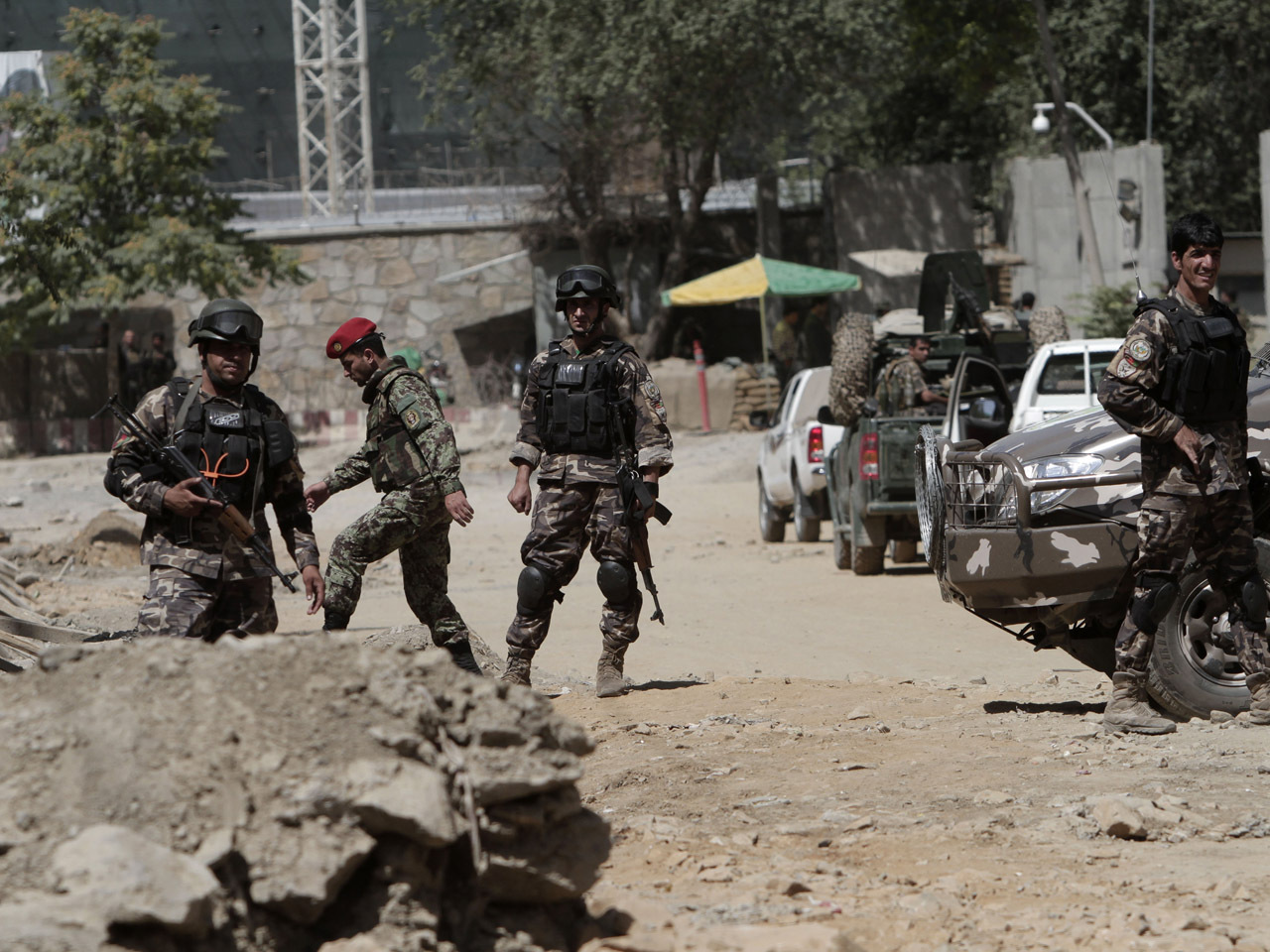 KABUL, Afghanistan Taliban militants with false papers and military-style uniforms bluffed their way through two checkpoints on their way to Afghanistan's presidential palace Tuesday before jumping out of their explosives-packed vehicle and opening fire on security personnel, according to Afghan officials and eyewitness accounts.

Another carload of Taliban fighters got stuck between two checkpoints and detonated their own car bomb.

The Taliban said all eight of its fighters died in the attack.

Authorities told CBS News three security guards were killed and one wounded in all.

The well-planned daylight assault in a highly fortified zone of the capital is a brazen challenge to Kabul's authority only a week after NATO formally handed over security for the entirety of the country to Afghan forces.

The gunbattle was witnessed by a group of journalists who were waiting to enter the palace grounds for a news event on Afghan youth at which President Hamid Karzai was expected to talk about ongoing efforts to open peace talks with the Taliban.

The palace is in a large fortified area of downtown Kabul that also includes the U.S. Embassy and the headquarters for the NATO-led coalition forces, and access is heavily restricted. Some Kabul residents initially thought the gunfire was a coup attempt, because the idea of a Taliban attack within the security zone seemed so unlikely.

The attackers were stopped in Ariana Square, at least 500 yards and several checkpoints away from the palace itself. It was unclear where Karzai was at the time.

The gunbattle started around 6:30 a.m. near the east gate leading to the palace next to the Afghan Ministry of Defense and the former Ariana Hotel, which former U.S. intelligence officials have confirmed is used by the CIA.

Kabul police chief Gen. Mohamad Ayub Salangi said the gunmen jumped out of their SUV and opened fire after being stopped by security forces while trying to use fake documents to get through a checkpoint. All gunmen were killed, and security guards wounded, he said.

The car bomb then exploded as it tried to enter the area. About 20 journalists waiting to attend Karzai's press event took cover behind a religious shrine, pulling a schoolboy off the street who had been caught in the open on his way to school, as the gunmen in camouflage uniforms exited their black Land Cruiser.

Taliban spokesman Zabihullah Mujahid claimed responsibility, saying in an emailed statement that "eight of our suicide bombers were able to reach the most secure area of Kabul," identifying them by name and saying they were carrying hand grenades, a machinegun and rocket-propelled grenades.

"The brave mujahedeen, with special tactics and help from inside, were able to reach their target with their weapons and cars," he said. He said their targets were the CIA building, the palace and the Defense Ministry and claimed "a number of foreign invaders were killed and wounded in the attack."

Smoke could be seen coming from the area of the hotel, but there was no immediate indication any of the buildings were hit in the attack, and Afghanistan's Kabul division army commander, Gen. Kadam Shah Shahim, said he knew of no deaths among security forces or civilians.

The NATO-led coalition in Afghanistan instituted a camp lockdown during the incident and said in a short statement that its forces had been ready to assist but were not called in by Afghan authorities.

The U.S. Embassy cancelled all consular appointments and advised American citizens in Kabul to stay indoors.

Ambassador James Cunningham condemned the attack, and extended U.S. "condolences to all Afghans affected by these senseless acts."

"All of the attackers were killed, without success in achieving their goals; this again demonstrates the futility of the Taliban's efforts to use violence and terror to achieve their aims," he said in a statement. "We again call on the Taliban to come to the table to talk to the Afghanistan government about peace and reconciliation."

The Taliban have indicated they are willing to open peace talks with the U.S. and the Afghanistan government and just last week opened an office in Qatar for possible negotiations.

But at the same time they have not renounced violence and attacks have continued across Afghanistan.

In the southern province of Kandahar, a minibus hit a bomb buried in the road, killing 11 members of a family, said Kandahar governor's spokesman Ahmad Jawed Faisal. Faisal said the dead included eight women, two children and a man, and two other men were also wounded.

In Oruzgan, the province north of Kandahar, provincial governor's spokesman Abdullah Hemat said Tuesday that six Afghan national police were killed the day before when their patrol was attacked with a roadside bomb.