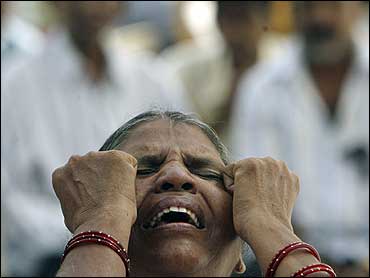 Nearly a year of attacks on Christians have put India's leaders on edge, and the latest flare-up in violence drew an angry denunciation from the country's Sikh prime minister as "acts of national shame."

"We are a secular state. We are a multireligious, multicultural nation," Prime Minister Manmohan Singh told reporters during a stopover in France.

Hours later, Hindu mobs rampaged through villages in eastern India on Tuesday, attacking a Christian minister, damaging two churches and setting off Hindu-Christian clashes that killed at least one person.

It was just the latest in a string of attacks by Hindu hard-liners since December that have left dozens of people dead, dozens of churches destroyed and thousands of people homeless, many forced to live for days in thick forests until they could make their way to safety.

In a country where Christians are a tiny minority, the attacks reflect how large swaths of India - despite a highly educated urban elite and its increasing role as a global economic power - are riven by religious and cultural animosities and how those divides are woven into political power struggles.

Just over 80 percent of India's 1.1 billion people are Hindu, but the nation is officially secular, a fact often played up by government leaders.

They note that religious minorities, such as Christians, who account for 2.5 percent of the people, and Muslims, who make up 14 percent, often coexist peacefully with Hindus. Some have risen to the highest levels of business, government, military and entertainment.

But throughout India's history, religious clashes have erupted regularly. And while Hindu-Muslim violence is often the bloodiest, Christians have also faced the wrath of Hindu militants.

Much of the recent violence has been in the eastern coastal state of Orissa, which has long been a battleground over Christian conversions of low-caste Hindus and missionary work among the indigenous people known in India as "tribals."

The missionaries deny forcing anyone to convert. Conversion to Christianity offers a partial escape from the stigmas of the Hindu caste system, and some missionaries run medical clinics and schools that can be far better than state-run institutions.

When violence boils up in Orissa, it can be horrific. In 1999, an Australian missionary who ran a medical clinic was burned alive - along with his two children - by a Hindu mob.

The latest troubles began after the Aug. 24 slaying of a hard-line Hindu leader, Swami Laxmanananda Saraswati, who had become known for advocating the reconversion of Hindu villagers who convert to Christianity.

Police blamed atheistic Maoist extremists for the killing, but right-wing Hindu groups blamed Christians and set fire to a Christian orphanage. That has been followed by mob attacks on churches as well as shops and homes owned by Christians. At least 28 people have been killed.

Militants Hindus argue their country's true religion is being undermined by Christian missionaries they accuse of using bribery, pressure and even murder to gather more followers.

"Hindu culture is under attack," said Gauri Shankar Rath, a top official in the VHP, the umbrella organization of Hindu nationalist groups.

The local government's response to the violence after the Hindu priest's slaying was halfhearted, and weeks later attacks are still flaring up.

And the trouble has spread. Hindu mobs attacked more than 20 churches and prayer halls in the southern state of Karnataka on Sept. 14, injuring at least 34 people. There have also been attacks on Christians in the states of Tamil Nadu, Kerala and Madhya Pradesh.

Ramachandra Guha, a historian, sees the trouble - particularly in Karnataka - as a display of political strength by right-wing Hindus.

The violence there, he noted, began just months after the BJP, the Hindu nationalist party that is now India's main opposition group, rose to power in the state government.

"It's a flexing of muscles by the Hindu right-wing," Guha said. The BJP is in the mainstream, he said, but when it won power in Karnataka its followers "at the extreme end of the spectrum felt they could do what they want."