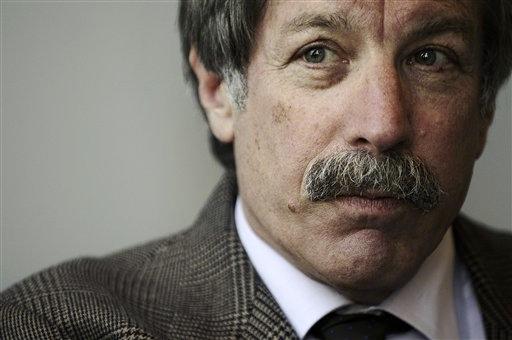 The roadside bomb in the Rafah refugee camp went off a few yards from where the bulldozer was piling up dirt in a crowded residential area, according to Associated Press Television News. No Israelis were injured but three Palestinian men 200 yards away were hit by shrapnel, one so severely it took off half his skull.

Ten people were wounded, including a Reuters TV cameraman, according to witnesses and hospital officials.

The violence came a day after vigilantes killed three Palestinians convicted of collaborating with Israel — two of them in their hospital beds — highlighting the progressive breakdown of law and order in Gaza.

Moments before, masked militants were filmed putting a detonator in an alley near the road. Palestinian ambulances were already standing by, as people in nearby buildings waved white flags to show the Israelis the buildings were inhabited by civilians.

The extensive Israeli army operation in the Gaza-Egypt border area began before dawn Tuesday. A spokesman said the bomb was one of four that went off during the night.

The Rafah border area is strewn with land mines and other roadside bombs planted by militants. The bulldozers and minesweepers scour the area to destroy tunnels used by Palestinians to smuggle arms from Egypt into the Gaza Strip.

Meanwhile, Hamas aired a video on the Al-Arabiya satellite television showing three masked men surrounded by weapons. One of the men read a statement threatening to rain rockets from the Gaza Strip on the Israeli town of Sderot.

On Monday, Palestinian vigilantes executed two collaborators in their beds in a Gaza hospital, where they were taken hours earlier with injuries from a grenade explosion in their jail cell that killed a third spy.

The Wild West-style episode occurred just as Palestinian leader Yasser Arafat ordered a restoration of law and order in the Palestinian territories, where militants outgun the fragmented Palestinian police forces.

The two collaborators killed in Gaza City's Shifa Hospital — the main medical facility in the city of about 300,000 Palestinians — had confessed during their trials to helping Israeli forces kill two top Islamic militants.

The chain of events began just after sunrise in the central prison at Palestinian security headquarters.

Two grenades were thrown into the cell where the convicted spies were held, wounding seven. One of the wounded died of his injuries in Shifa Hospital.

Around noon, five masked gunmen taking part in a funeral procession for three other militants killed in an overnight clash with Israeli forces broke away and raced into the hospital.

The five went straight to the room where Mahmoud al-Sharef, 52, was being treated for wounds from the grenade attack. They shot him twice in the head, killing him, and fled the building. Police detained one militant for questioning.

At least 20 armed militants raced to the hospital in four vehicles, witnesses said, screeching to a halt at the entrance. Most of the gunmen deployed on the street, closing it off, while five ran into the hospital.

This time their goal was the intensive care unit, where Walid Hamdiyeh, 42, was being treated. They shot him three times in the head and chest, killing him, and escaped.

In a statement, Hamas claimed responsibility for the grenade attack and the killing of Hamdiyeh.

Al-Sharef and Hamdiyeh were considered the prime collaborators held in Palestinian custody because of their roles in Israel's killing of militants.