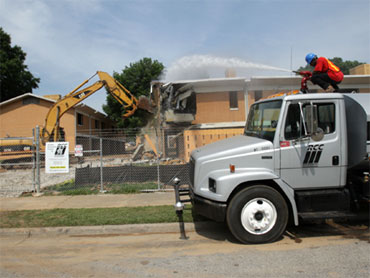 The nation's bulldozer attack on crime and poverty will soon make Atlanta - home of the first public housing development - the first major city to eliminate all of its large housing projects.

Cities from Boston to Los Angeles are following its lead. For more than 15 years, housing officials across the country have been razing the projects where some 1.2 million families live and replacing them with a mix of higher-rent and subsidized apartments and homes.

Alexandria, La., has taken down at least 247 units. Buffalo, N.Y., has demolished about 1,000 aging homes. Atlanta expects to finish tearing down the last of its sprawling projects next June.

Advocates for the poor worry that not enough subsidized homes remain, and thousands of families are being dumped on the street. Less than half of the 92,000 units demolished by cities have been replaced with traditional public housing.

Most of the displaced residents have received vouchers to put them in privately owned housing. The Department of Housing and Urban Development acknowledges, however, that it doesn't know what happened to thousands of families.

Some longtime residents feel like afterthoughts in an ambitious overhaul that is supposed to help them.

"I don't think it's fair," said Jeff Walker, who was forced out May 30 from Atlanta's Bankhead Courts project.

Even though drug violence there was once so brazen that mail carriers had police escorts, he said: "We didn't ask to be moved."

The housing projects in Atlanta date back to 1936, when the nation's first public housing community, Techwood Homes, was built here. President Franklin D. Roosevelt heralded it as "a tribute to useful work under government supervision" and the first step in building a safety net for the working poor during the Depression.

Decades of cultural and policy shifts transformed that safety net into a permanent home for generations of families surrounded by disproportionately high crime.

"There was no kind of forward-looking plan, and no commitment to dramatic change," said Cisneros, who in the early '90s helped craft what is known as the Hope VI program.

That meant the nation's more than 3,300 housing authorities could tear down blighted public housing and rebuild smaller, more easily managed neighborhoods while the vouchers would prevent anyone from being left homeless.

At least in theory.

In 1996, toward the end of Atlanta's makeover as host of the Olympics, the city pioneered the creation of mixed-income developments - former public housing communities demolished and rebuilt to include market-rate houses and apartments alongside a whittled-down number of public housing units. Mixing higher-income families with lower-income ones spurs the latter into self-improvement, housing officials say, while deconcentrating poverty.

"Something dramatic needed to occur," said Atlanta Housing Authority CEO Renee Glover, who took over in the '90s, when Atlanta had a higher percentage of its population living in public housing projects than any other U.S. city.

She's used some $220 million in Hope VI and other development funds to help transform 14 developments in one of the nation's most ambitious public housing revampings.

Successes include the Villages of East Lake, a community of tidy duplexes and flower-lined porches built on the ruins of a public housing complex so violent that locals called it "Little Vietnam."

But such transformations are not to be enjoyed by everyone. The number of units in the complex was cut in half, and a 2007 Georgia Institute of Technology study found that just one-third of the original residents managed to resettle into the new mixed-income community.

Nationwide, HUD estimates Hope VI will eventually demolish 95,998 public housing units. A little more than half of those will be replaced with traditional public housing. HUD is also building more than 50,000 other units in mixed-income communities, which will range from semi-subsidized apartments with higher income requirements to market-rate houses.

So far, 17,911 displaced families have returned to revitalized communities. HUD expects a total of 22,510 families to return, a fraction of those displaced.

HUD records show the whereabouts of 12,595 families, many of whom faced eviction for lease violations, are unclear.

"We don't know whether or not those people who have been displaced are getting Section 8 vouchers to go someplace else, and whether someplace else is available," said Rep. Maxine Waters, D-Calif. Originally a supporter of public housing reform, she's come to question the program that's demolished thousands of units in Los Angeles and San Diego.

Waters has requested a demolition moratorium and 20,000 additional Section 8 vouchers to support displaced families, an option that comes with its own problems. Critics have long attacked Section 8 as a poorly run program that supports landlords for providing barely inhabitable housing.

Atlanta's leaders have set up safeguards to ease the transition, including incentives to encourage more private renters to accept Section 8 vouchers and counseling for families facing sudden change.

Glover believes pushing chronic public housing residents out is the only answer to breaking the cycle of poverty, and she's led many of the nation's housing authority leaders to the same conclusion.

Huntsville, Ala., Housing Authority CEO Michael Lundy has experienced it personally. As a child, Lundy lived in public housing until his family saved enough money to move out. Soon, his neighbors were teachers, musicians and entrepreneurs.

Lundy said he began considering college after he "all of a sudden realized that you know what, I can do all of those things."

His agency is looking to replace some of its 1,700 public housing units with mixed-income developments, and promoting self-sufficiency.

"Public housing should just be a temporary place to stay," Lundy said. "Not a way of life."