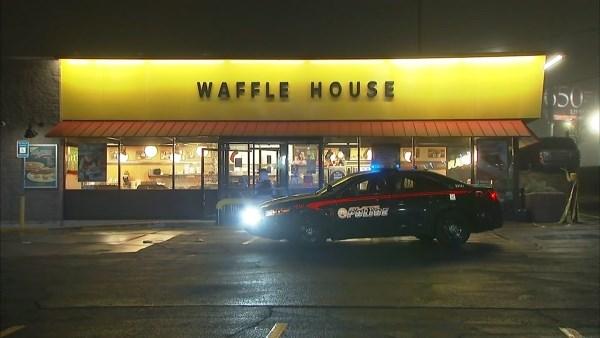 ATLANTA – An aspiring rapper in Atlanta who has apparently been shot on multiple occasions was shot again Tuesday morning while waiting to order food at a Waffle House, and the suspect or suspects are at large, according to police.

CBS Atlanta affiliate WGCL reports Yung Mazi is recovering after being shot in the chest at about 4 a.m. Police said Mazi entered the restaurant and was about to order when he was shot. A description of the suspect or suspects in Tuesday’s shooting was not immediately available.

Hours after the shooting Yung Mazi tweeted, “God made me bulletproof.” The rapper said in an an interview with DJ Smallz Eyesposted to YouTube in June that he had been shot 10 previous times.

Yung Mazi said in the June interview that he named a recent mixtape “Physical Therapy” because he worked on it while recovering after using a wheelchair to get around following a previous shooting.

He said in the interview that he “keeps getting shot” in part due to his skin tone, the fact that “some people don’t like real dudes,” as well as the expensive accessories he wears.

“I might walk around with a quarter-million-dollars-worth of jewelry on,” Mazi said in the interview.

(WARNING: The below video contains strong language that some readers may find offensive.)

According to his website, Mazi was raised a devout Muslim, and is a father.

In one passage in his website’s biography, Mazi indicated he’s been shot on multiple occasions in his life.

The biography states: “He was shot five times—one bullet hitting him in the head and leaving him temporarily brain damaged, almost ending his life. ‘When the bullet hit me in the head,’ Mazi recollects, ‘it greatly affected me. I had to learn how to read, write, and speak all over again. I’m still not 100% right. I tried doing my daughter’s elementary school homework and it was hard. I couldn’t count money. My brother had to send text messages for me from my phone. It was deep.’”