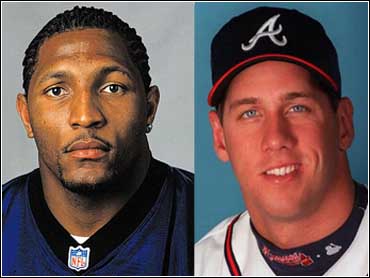 Monday, June, 5, 2000, a very interesting day in the world of sports hypocrisy. In case you missed it, let me fill you in on the details of what happened.

Atlanta pitcher John Rocker, a man who will never work for the United Nations, was sent down to the Braves' Triple-A club. The Atlanta organization said it wasn't punishment for Rocker's continued stupid behavior off the field but, instead, it was because of his on-field performance. But wait a second!! He's being sent down to the minors because of his poor on-field performance??

John Rocker is the best left-handed relief pitcher in baseball! And this isn't my opinion, this is by the numbers. How can you say that he is being sent down to the minors for his on-field performance?

Now I have nothing against the Braves organization for disciplining Rocker for his comments. But come on! Say that's why he's being punished.

John Rocker said some stupid things and he said he was sorry. If in years past Rocker's behavior showed one ounce of bigotry there is not a single reporter who has uncovered it. And, believe me,there have been thousands of so-called journalists looking into Rocker's past, just hoping to find something negative of the Braves' pitcher.

Could it possibly be that Rocker's comments were taken out of context or could he have possibly been misquoted? A journalist misquoting someone? That has never happened, right?

John Rocker was sent to the minors and stands to lose millions of dollars of his salary for saying something politically incorrect, while on the same day, the National Football League announced that they "will not" suspend Baltimore Ravens linebacker Ray Lewis, despite Lewis pleading guilty to being involved in the death of two men following last year's Super Bowl. While Lewis may not have stabbed the two victims himself, he lied to police and tried to cover-up the murder by telling his friends, "Keep your mouths shut."

Lewis didn't go right to the police station following the murders to tell them what happened. Instead, he waited over five months and until he was charged with the murders before telling the police what really happened. And the National Football League seems to be fine with that.

The prosecutors in the double murder say they made the right call in charging Lewis with assault and murder despite the plea deal. An Atlanta judge sentenced Lewis to a year's probation for his involvement in the double murder, but that won't stop him rom playing next season, according to the NFL.

The Baltimore Ravens announced that Lewis will be welcome to join the club as early as next week at a voluntary minicamp. Lewis stands to make $26 million over his four-year contract. How much will the victims be making over the next four years?

I wonder if the leagues have rules about player conduct off the field. If so, it goes something like this. If your entourage is involved in a double murder and you try to cover it up... that's okay. As long as you eventually plead guilty.

But if you're a professional athlete and you say something politically incorrect then watch out... you might just find yourself fined, suspended or maybe even out of a job.

We think the players are ruining the game, but the scary truth may be that the leagues themselves are to blame.