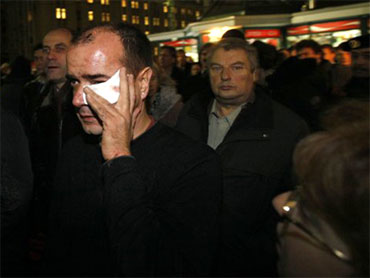 Two U.S. track and field champions, 1,500-meter runner Regina Jacobs and shot putter Kevin Toth, were among the first group of athletes to testify before a grand jury probing a nutritional supplements lab.

Jacobs and Toth were among four track and field athletes who appeared before the federal panel on Thursday. Both Jacobs and Toth have been customers of the Bay Area Laboratory Co-Operative, or BALCO.

Dozens of other athletes, including baseball's Barry Bonds and Jason Giambi and boxer Shane Mosley, have been subpoenaed in the case.

An appearance before the grand jury, or being subpoenaed to testify, does not necessarily imply wrongdoing by any of the athletes. Federal officials have refused to discuss the scope of the grand jury or its secret proceedings.

But a source familiar with Thursday's daylong proceeding said the athletes were asked whether they had taken the newly discovered designer steroid THG or the endurance-boosting hormone EPO.

The source, who requested anonymity, said the athletes were asked whether they had obtained THG or EPO from BALCO.

The source also said the athletes were asked whether they had knowingly purchased steroids from BALCO, or whether they thought they were buying legal nutritional supplements.

Jacobs and Toth are among four U.S. athletes who tested positive for THG at the U.S. track and field championships in June at Stanford, according to another source close to the investigation who spoke to The Associated Press on Thursday on condition of anonymity.

Jacobs and her attorney, Douglas Schwartz, refused to comment Thursday when asked whether she had tested positive for THG at that meet.

"Regina was here. She did nothing wrong. She left the grand jury to carry on," Schwartz said after Jacobs had completed her afternoon testimony. "I really feel sorry for these athletes, because they've really become the victims here."