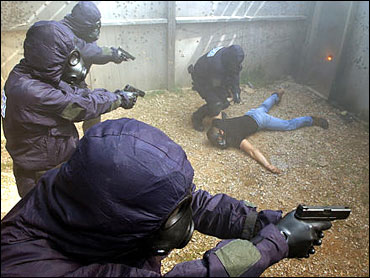 With less than 11 months to go before the Athens Olympics, security is much more porous than either the Greek or U.S. governments has acknowledged, The Washington Post reported in its Saturday editions.

Planning to protect the half-million athletes and spectators is beset by problems, according to confidential U.S. government reports and administration officials, the Post said.

Intelligence reports circulating within Washington describe a number of Greek security lapses, including one that allowed a test agent disguised as a pregnant woman to carry a mock bomb through a checkpoint and another to plant a fake device on a ferry. The reports, from law enforcement and intelligence agencies, also cite disorganized police forces, breakdowns in maritime patrols and serious concerns over the slow pace of counterterrorism planning, the Post points out.

Security personnel from around the globe said an August test revealed serious, if correctable, deficiencies.

"All the big stuff got through," one U.S. official responsible for security planning told the Post, referring to guns and mock explosives used in the test. "If you can get the big stuff through, getting chemical and biological stuff through is no problem."

"It took them [the Greeks] a long time to go into action," Arik Arad, former director of security for El Al Airlines, told the newspaper. "Lately they are taking it seriously."

The Greek government and Olympic organizers on Saturday denied the Post report that undercover agents found serious lapses while testing security for the 2004 Games.

"There have already been tests carried out by Greek police officers ... with the best possible results, one whole year before the games," government spokesman Christos Protopapas said.

"Of course, these scenarios mentioned by the newspaper have no bearing on reality," Protopapas said. He said "organized commercial interests" seeking security contracts were behind the accusations that Athens was not prepared for terrorist threats.

Athens organizers stressed security is a top priority and their efforts have been recognized by the IOC and by U.S. officials.

"Aside from any fantastic scenarios and exaggerations there is only one reality: Greece is preparing very hard to organize absolutely safe Olympic Games in 2004," organizers said in a statement.

With major athletic events long a target for terrorists -- one consultant has catalogued more than 100 attempted attacks -- and hostilities continuing in Iraq, Greece will likely spend close to $1 billion on security, nearly double the expenditures for the Games in Sydney and Salt Lake City, said George A. Papandreou, the Greek foreign minister, who spoke to Post reporters and editors this month.

Greece has hired as consultants the world's leading terrorism and security experts, who have brought in teams to conduct risk assessments of all the Olympic venues, the Post noted.

A state-of-the-art command and control center will anchor a wide-ranging policing network. Thousands of closed-circuit surveillance cameras will be scattered throughout the city and event areas.

Law enforcement and intelligence agents from Israel, Germany, Britain and the United States, among others, are in Athens to train colleagues in counterterrorism measures, including how to prevent or respond to a chemical or biological attack. Forty-five thousand people, from the Greek military to citizen volunteers, firefighters and private security contractors, will be deployed throughout the country. Some will be trained by foreign experts in VIP protection, evasive driving and hostage rescue.

The United States has established an interagency task force with members from the CIA, the State Department, the FBI and the Pentagon to troubleshoot security problems and observe progress in Athens. In addition, Ambassador Thomas J. Miller, who was scheduled to end his diplomatic tour in Greece before August, will stay there through the Olympics.

Some officials told the Post that intelligence reports nearly a year before a major event such as the Olympics are designed to highlight problems and that security officials are accustomed to resolving such issues.

"They have come a long way. Is there room for improvement? Absolutely," one administration official involved daily with the war on terrorism remarked. Many of the shortcomings, especially the training of Greek personnel, are being corrected, he said to the newspaper. In the meantime, the administration is "actively engaged with the Greeks because we've known it was going to be a problem."

The Greek leadership, which at first shunned outside involvement and insisted that Greece could safeguard the Games, has undergone something of a sea change in attitude and is now accepting more aggressive assistance from other governments, according to the Post. Despite the cooperation, however, it is still a struggle to ensure that the Greeks remain vigilant and on schedule, officials said.

"There is the Greek way and the American way. We can't expect everybody to do it our way," Larry Buendorf, chief of security for the U.S. Olympic Committee, is quoted by the Post as saying. "They may tend to be a little more reactive. We tend to be more proactive." In the end, Buendorf said he believes that Greece, working with others, will provide adequate safety.

One major concern, an Olympic consultant told the Post, is a delay in getting the command center fully functioning, a problem noted by the International Olympic Committee. The facility will allow security officers to share video and audio feeds in real time and to retrieve information instantly to look for trends. David Tubbs of Science Applications International Corp., the primary contractor, said planning and construction is on schedule.

With a long coastline dotted with scores of islands, close proximity to the Balkans and lax immigration policies, Greece has long had a reputation as a haven for terrorists, numerous intelligence officials said to the Post.

Under pressure from the United States, Greece has lately taken a more active role in the fight against terrorism. With U.S. and British assistance, it dealt a major blow to November 17, the home-grown terrorist organization that had operated on Greek soil for 25 years, killing 23 people, including a CIA station chief and three other Americans.

But as the Athens organizing committee moves toward shoring up security for the Olympics, government intelligence reports describe infighting among Greek police officers and a number of incidents, including problems revealed by the recent counterterrorism exercise, the Post reported.

The exercise, conducted in August by security and military forces, was aimed at challenging the physical and technical systems in place. The U.S. security planning official characterized the exercise as a major failure. He said most attempts to pierce security at several of the Olympic venues were successful.

Another intelligence official told the Post that the government's position is "concerned but not alarmed."

At least one effort used a tactic that terrorists have relied on dozens of times over the past 30 years: A young woman posing as an expectant mother carried fake explosives in a stomach pouch past guards without being stopped.

"If the Olympics were held today, the security would be worse than Munich," the U.S. security planning official told the Post, referring to the site where 11 Israeli athletes and trainers were killed by pro-Palestinian terrorists who took them hostage during the 1972 Games.

One report, he said, showed that "Greek officials are alarmed and unhappy with the August exercise."

Israel has voiced displeasure with the arrangements and asked to send its own security detail to protect its athletes, the Post reported. The Greek government reluctantly agreed. Traditionally, the host country is solely responsible for guarding athletes and does not authorize outside police agencies to carry weapons in the Olympic Village.

"We sent a team to Athens to look over security," a former Israeli military officer told the Post. "It was so bad that we privately threatened to boycott the Games unless things were changed."

Another test exercise carried out last year to determine the security strengths and weaknesses of the main port in Piraeus also revealed problems, according to intelligence reports, U.S. government officials and security consultants, the Post reported.

During the exercise, test agents were able to gain access to a ferry and plant a mock bomb. The device was ultimately discovered and defused. In 1988, terrorists from the Abu Nidal organization took control of a Greek ferry in Athens, killing nine people and wounding 99 with machine-gun fire and grenades.

Though security was breached in the test, Greek Olympic officials hailed it as a success and said the port area would be safe for cruise ships that will be used for housing and office space by, among others, the U.S. Olympic Committee.

"We did a complete security assessment of the port of Piraeus," Neil Fergus, chief of Intelligent Risks, an Australian company hired by Greece, told the Post. "There will be some challenges."

The port will be protected by a guarded perimeter fence and only individuals who are accredited and cleared by security will be allowed to enter the area to board the ships. Coast guard vessels will patrol the port's waters.

But security fences and maritime patrols are not always successful, experts told the Post, citing the bombing in 2000 of the USS Cole, a Navy warship that was nearly sunk in Yemen by suicide bombers in a small boat loaded with explosives. The warship was in a secure area with armed lookouts posted.

The U.S. Navy recently provided a classified briefing on water-borne threats, some of which are applicable to the Olympics, to Defense Department officials. "One area they stressed was the problem of stopping a terrorist on a jet ski loaded with explosives," a participant told the Post.

In addition to the Black September assault on the Games in Munich, terrorists tried to attack the 1998 Olympics in Japan and the 1988 Games in Seoul twice, according to Mizell's data. During the 1984 Los Angeles Games, the Weather Underground, a U.S. radical group, planned an attack with a large quantity of plastic explosives, said Bill Rathburn, a former police chief and consultant to the State Department who has been involved with several Olympics. Eric Rudolph has been charged with planting a bomb that killed one spectator and injured 100 others during the 1996 Summer Olympics in Atlanta.

"No security is 100 percent," said Louis Mizell, a former State Department special agent and intelligence analyst who has created a database that contains nearly 40,000 terrorist tactics and trends. "Massive international crowds, unlimited symbolic targets, thousands of athletes and easy access across borders and from the sea will make the 2004 Olympics a very tempting target," he told the Post.