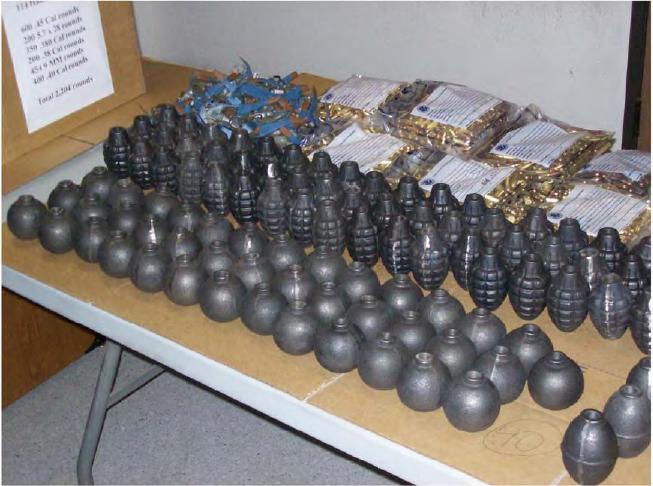 Evidence photos just turned over to Congress under subpoena show a frightening stash of grenade parts, fuse assemblies and more than 2,000 rounds of ammunition. It was all hidden in a spare tire of an SUV crossing from the US to Mexico in 2010. The accused smuggler, an alleged drug cartel arms dealer named Jean Baptise Kingery, was questioned by agents from the Bureau of Alcohol, Tobacco and Firearms (ATF) but released.

Documents handed over to Congress by the Justice Department shed new light on missteps in the grenades case, and how ATF tracked the suspect for years.

ATF started watching Kingery in "2004 related to AK47 purchases," according to an internal email, "it is believed that he is trafficking them to Mexico." A full five years later in late 2009, ATF also learned Kingery was dealing in grenades: he'd ordered 120 grenade bodies on the Internet.

Grenades are weapons of choice for Mexico's killer drug cartels. An attack on a casino in Mexico last year killed 53 people.

Documents show ATF secretly intercepted the grenade bodies Kingery had ordered, marked them, and delivered them to him on Jan. 26, 2010. Their plan was to follow Kingery to his weapons factory in Mexico, with help from Mexican authorities Immigration and Customs (ICE).

ATF realized they might lose track of Kingery and the grenade parts in Mexico. But their emails show little attention to those who could be killed. Instead, officials expressed concerned with tying the grenades to Kingery after they reached Mexico. "Even in a post blast, as long as the safety lever is recovered we will be able to identify these tagged grenades," says one email.

An official now investigating ATF and the Justice Department for their actions in the Kingery case tells CBS News: "All the usual safeguards of law enforcement were thrown out. They were more worried about making a big case than they were about the public safety."

The plan to allow Kingery to traffic grenade parts into a foreign country and track him to his factory drew strong internal objections.

"That's not possible," wrote a lead ATF official in Mexico. "We are forbidden from doing that type of activity. If ICE is telling you they can do that, they are full of [expletive]..."

ATF officials in Mexico worried that once Kingery and the grenades crossed the border, they would disappear. And that's exactly what happened. Though ATF agents say they'd given all the specifics to Mexican military and police, the Mexicans failed to stop Kingery once he crossed into Mexico.

Four months later, Kingery surfaced again in the U.S. This time, the Border Patrol caught him trying to smuggle the new stash of grenade hulls shown in the photos. ATF questioned him but, once again, he was let go. Nobody has stepped forward to explain why Kingery was released after this incident. He allegedly continued to supply the Mexican drug cartels for another year and a half.

Kingery might still be on the street if Mexican authorities hadn't arrested him last August after raiding his stash house and factory. Police say they found enough parts to build 1,000 grenades. They also say Kingery confessed to teaching cartels how to make grenades, as well as helping them convert semi-automatic weapons to fully-automatic.

The Justice Department Inspector General is investigating the Kingery case along with ATF's Operation Fast and Furious, which allowed thousands of assault rifles and other weapons to "walk" into the hands of Mexican drug cartels in a failed attempt to take down a major cartel.

There are some similarities between the Kingery grenade case and Fast and Furious. The chief suspect in Fast and Furious, Manuel Celis-Acosta was stopped by law enforcement three times but released -- while allegedly trafficking firearms for cartels. It wasn't until weapons linked to him turned up at the murder of Border Patrol Agent Brian Terry that ATF finally charged Acosta.

The Kingery case and Fast and Furious were both supervised out of ATF's Phoenix office by Special Agent in Charge Bill Newell. It was Newell who wrote an email and delivered the bad news about Kingery to Washington DC headquarters: Mexican officials "lost Kingery" even though "they had plenty of notice and descriptive info."

The Justice Department and ATF had no immediate comment.