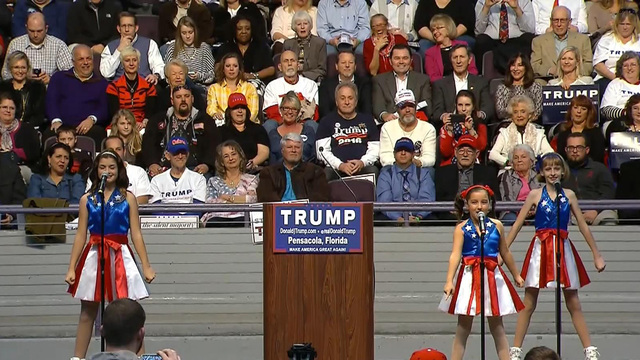 Every election cycle, a campaign tribute song emerges that has a catchy tune, a stirring chorus, and brings reasonable credit to a presidential candidate.

In 2008, then-Illinois Sen. Barack Obama was propped up with pop star Will.i.am's original "Yes We Can" tribute song.

In 2012, former Pennsylvania Sen. Rick Santorum had the "Game On" girls, two sisters who could carry a tune and produced a country song whose message reflected Santorum's conservative principles well.

For the 2016 cycle, the USA Freedom Kids' rendition of "Freedom's Call" -- a pro-Donald Trump take on an old World War I propaganda anthem -- is probably not that song.

Three of the USA Freedom Kids marched out Wednesday at Trump's crowded Pensacola, Florida rally to sing their hearts out as they performed simple dance steps.

"Cowardice!" two of the pre-teen girls sang in opening, before Trump took the stage.

Another young girl responded, gesticulating on stage: "Are you serious?!"

It goes on: "Apologies for freedom?" "I can't handle this!"

And at one point, the lyrics call for "enemies of freedom" to "face the music" ("Come on, boys, take 'em down!"). America's leaders, the song says, need to either "deal from strength or get crushed every time."

The group's manager, former television stunt man and Trump supporter Jeff Popick, is also the father of one of the performers.

"To me, freedom is everything," the 53-year-old Popick told the Washington Post in an interview. "That's what this group is about. That's what I'm about. Freedom for everybody. That's the inspiration."

Freedom, though, can sometimes be difficult to convey, especially in a song-and-dance routine.

The USA Freedom Kids, at least, acknowledge that: "Oh say can you see," they sang Wednesday. "It's not so easy... But we have to stand up tall and answer freedom's call."