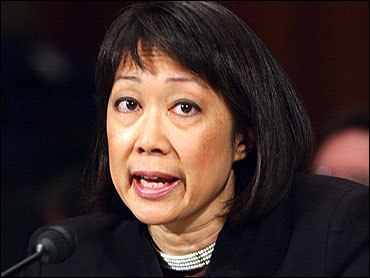 Presidents get to pick whoever they want for U.S. attorneys. When Bill Clinton took office he cleaned house — sent 90-some of them packing.

It's what presidents do. These attorneys serve, as they say, at the pleasure of the president. Because they are political appointees, it's pretty much assumed they'll be on the same philosophical page as the president. Funny thing though about these U.S. attorneys: They get their jobs and they start wanting to prosecute bad guys, no matter who they are.

The Republican Party suffered embarrassment aplenty when the U.S. attorney prosecuted Randy Cunningham, a San Diego congressman who was taking kickbacks from the defense industry and is now in prison.

Attorney General Alberto Gonzales told me today that the U.S. attorney had done a great job with that. But it seems the White House would rather she had been out prosecuting immigration cases, so she is looking for work.

I guess that means when you serve at the pleasure of the president, you had better make sure he is pleased.