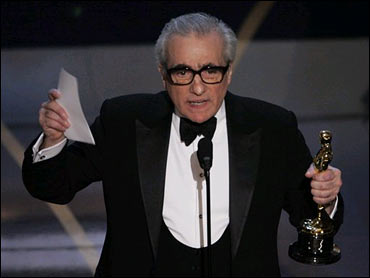 The mob saga "The Departed" won Best Picture at the Academy Awards Sunday, a triumph for a homegrown American film in an evening that featured the most internationally diverse field of nominees in the history of Hollywood's highest honors.

The film's director, Martin Scorsese - who has been waiting many years to clutch the coveted statue - walked off with the award for Best Director, taking the prize for his crime epic after five previous losses.

"Could you doublecheck the envelope?" said Scorsese, who had been the greatest living American filmmaker without an Oscar. He also had never delivered a best picture winner before, despite crafting such modern masterpieces as "Raging Bull" and "Goodfellas."

Scorsese received his Oscar from three contemporaries and friends, Steven Spielberg, Francis Ford Coppola and George Lucas. "So many people over the years have been wishing this for me," Scorsese said.

In an evening when no one film dominated as Oscar shared the love among a wide range of movies from around the world, three of the four acting frontrunners won: Best Actress Helen Mirren as British monarch Elizabeth II in "The Queen"; Best Actor Forest Whitaker as Ugandan dictator Idi Amin in "The Last King of Scotland"; and Supporting Actress Jennifer Hudson as a soul singer in "Dreamgirls."

2The other frontrunner, Eddie Murphy of "Dreamgirls," lost to Alan Arkin in "Little Miss Sunshine."

"For 50 years and more, Elizabeth Windsor has maintained her dignity, her sense of duty and her hairstyle," said Mirren, 61, who has been on a remarkable roll since last fall as she won all major film and television prizes for playing both of Britain's Queen Elizabeths.

"She's had her feet planted firmly on the ground, her hat on her head, her handbag on her arm and she's weathered many many storms... If it wasn't for her, I most certainly wouldn't be here. Ladies and gentlemen, I give you the queen," Mirren said, holding her Oscar aloft.

"The Departed" led the evening with four Oscars, also winning for adapted screenplay and editing.

The Oscars had their most diverse and international scope ever, with wins for two black actors and global dramas that included "Pan's Labyrinth," "Babel" and "Letters From Iwo Jima."

The soft-spoken Whitaker, 45, won for an uncharacteristically flamboyant role as the barbarous yet mesmerizing Amin.

5"When I was a kid the only way I saw movies was from the back seat of my family's car at the drive-in movie," Whitaker said. "It wasn't my reality to think I would be acting in movies, so receiving this honor tonight tells me it's possible. It is possible for a kid from east Texas, raised in south central L.A. and Carson, who believes in his dreams, commits himself to them with his heart, to touch them and to have them happen."

Arkin, 72, played a foul-mouthed grandpa with a taste for heroin in "Little Miss Sunshine," a low-budget film that came out of the independent world to become a commercial hit and major awards player.

"More than anything, I'm deeply moved by the open-hearted appreciation our small film has received, which in these fragmented times speaks so openly of the possibility of innocence, growth and connection," said Arkin.

Hudson's Oscar comes for what is her very first movie, playing a powerhouse vocalist who falls on hard times after she is booted from a 1960s girl group. The role came barely two years after she shot to celebrity as an "American Idol" finalist.

"Oh my God, I have to just take this moment in. I cannot believe this. Look what God can do. I didn't think I was going to win," Hudson, 25, said through tears of joy. "If my grandmother was here to see me now. She was my biggest inspiration."

"I thank you all for helping me keep the faith, even when I didn't believe," she said, holding her Oscar in the air.

"Little Miss Sunshine," which came out of the low budget independent world to become a commercial hit and major player in Hollywood's awards season, also won the original screenplay Oscar for first-time screenwriter Michael Arndt, who was formerly an assistant to actor Matthew Broderick.

The film follows a ghastly but hilarious trip by an emotionally messed-up family rushing to get their darling girl - ten-year-old Supporting Actress nominee Abigail Breslin - to a beauty pageant.

3"When I was a kid, my family drove 600 miles in a VW bus with a broken clutch," Arndt said, describing a road trip that mirrored the one in the film. "It ended up being one of the funnest things we did together."

The nonfiction hit "An Inconvenient Truth," a chronicle of Al Gore's campaign to warn the world about global warming, was picked as best documentary.

"People all over the world, we need to solve the climate crisis. It's not a political issue. It's a moral issue," Gore said, joining the film's director, Davis Guggenheim, on stage.

"An Inconvenient Truth" also won original song for Melissa Etheridge's "I Need to Wake Up."

"Mostly, I have to thank Al Gore for inspiring me, showing me that caring about the earth is not Republican or Democrat, it's not red or blue. We are all green," Etheridge said.

Etheridge kissed her partner Tammy Lynn Michaels on the lips when her name was announced and onstage referred to Michaels as her wife. The couple held a commitment ceremony in 2003 and are the parents of twins.

"Maybe someone at home is going, `Did she say wife?"' Etheridge said backstage. "I was kissing her because that's what you do, you kiss your loved one when you win an Oscar, that's what I grew up believing."

DiCaprio set up a gag with Gore, asking the 2000 presidential candidate if there was anything he wanted to announce.

"I guess with a billion people watching, it's as good a time as any. So my fellow Americans, I'm going to take this opportunity here and now to formally announce my intentions ...," Gore said, his voice trailing away as the orchestra cut him off.

Composer Gustavo Santaolalla won his second straight Oscar for original score for "Babel," a film "that helped us understand better who we are and why and what we are here for," he said. He won the same prize a year ago for "Brokeback Mountain."

"I asked my kids, `What should I say?' They said, `Thank all the men for wearing penguin suits,"' said "Happy Feet" director George Miller.

"To Guillermo del Toro for guiding us through this labyrinth," said art director Eugenio Caballero, lauding the writer and director of "Pan's Labyrinth," a story of a girl who concocts an elaborate fantasy world to escape her harsh reality in 1940s Fascist Spain.

Germany's "The Lives of Others," about a playwright and his actress-girlfriend who come under police surveillance in 1980s East Berlin, won the foreign-language Oscar, the films it beat including "Pan's Labyrinth."

"Thank you to my father and all the brave and honorable men and women in uniform who in a time of crisis have all made that decision to defend their personal freedom and liberty no matter what the sacrifice," Murray said.

The record holder for Oscar futility, sound engineer Kevin O'Connell, extended his losing streak to 19 nominations without a win. This time, O'Connell and two colleagues were nominated for sound mixing on "Apocalypto," Mel Gibson's portrait of the savage decline of the ancient Mayan empire, but they lost to another trio of sound engineers that worked on "Dreamgirls." "Apocalypto" lost in all three categories in which it was nominated, all for technical achievements.

Once an evening of backslapping and merrymaking within the narrow confines of Hollywood, the Academy Awards this time looked like a United Nations exercise in diversity.

The 79th annual Oscars featured its most ethnically varied lineup ever, with stars and stories reflecting a growing multiculturalism taking root around the globe.

"What a wonderful night, such diversity in the room," said Ellen DeGeneres, serving as Oscar host for the first time, "in a year when there's been so many negative things said about people's race, religion and sexual orientation.

"And I want to put this out there: If there weren't blacks, Jews and gays, there would be no Oscars," she said, adding" "Or anyone named Oscar, when you think about that."

A gospel choir clad in white robes helped DeGeneres serenade the sprawling room of Oscar nominees. "Tonight, we're going to celebrate you, just because you're nominated," she said to the contenders, singling out nominees such as Abigail Breslin, Peter O'Toole, Jennifer Hudson and Leonardo DiCaprio.

DeGeneres opened the show by thanking the audience for the gig. "This has been a dream of mine since I was a little girl," she said.