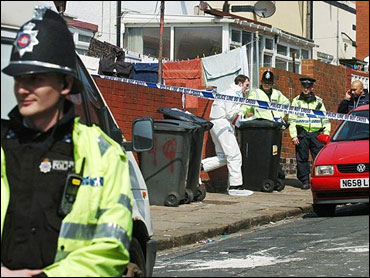 Police said Tuesday they have evidence that at least one bomber died in the attacks on London's transport system, and are trying to determine whether all of them died.

At least three of the suspected bombers came from the West Yorkshire region, which includes Leeds, said Peter Clarke, head of the Metropolitan Police anti-terrorist branch.

Closed-circuit TV video showed that all four had arrived at King's Cross station by 8:30 a.m. on Thursday, about 20 minutes before the blasts began that killed at least 52 people, Clarke said.

In a Scotland Yard news conference, Clarke said police had "strong forensic and other evidence" that the man who carried a bomb onto a subway train that exploded between the Aldgate and Liverpool Street stations had died in the blast, and they were awaiting confirmation from the coroner. Police were trying to determine whether the other three also died in the explosions.

Police indicated that there had been a breakthrough in their inquiry.

"This investigation is going at great speed," Clarke said.

One of the suspects had been reported missing by his family at 10 a.m. Thursday, and some of his property was found on the double-decker bus in which 13 died, Clarke said.

Officers blasted their way into one of the homes in Leeds on Tuesday in search of explosives.

Police Inspector Miles Himsworth said no one was inside the house at the time. Detectives had not yet recovered anything from the building but were scouring it for explosives and other items, possibly including computers, he said.

"It's a very, very complicated investigation," he said. "It will be a very slow and very meticulous search in order that any evidence that is there can be gathered carefully."

Earlier, police had searched five residences elsewhere in the area.

In another development, police shut down a rail station 30 miles north of London Tuesday and carried out three controlled explosions on a car they suspect is linked to the terrorist attacks, police said.

Bedfordshire police gave no details about why officers thought the explosions – used to disarm explosive devices – were necessary.

The Luton station and a nearby multistory parking lot both were closed for safety, police said.

There were no immediate reports of arrests.

Back in London, CBS News Correspondent Bianca Solorzano reports police continue searching for forensic evidence and working to recover bodies. They say it could be days or weeks before they will be able to recover and identify all the dead.

While Londoners are being praised around the world for their resolve following last week's bombings, the same is not being said for the U.S. military.

"We trust the 4 million Americans who come to London each year are made of sterner stuff than the U.S. Air Force," said an editorial in The Daily Mail newspaper.

U.S. officials did their best to defend the order.

"We are telling our own citizens, telling our employees here, to be cautious, to be alert," said U.S. Embassy spokesman David Johnson.

"I would have hoped our American allies could show a little more courage," said Andrew Robathan, a Conservative member of Parliament.

British Prime Minister Tony Blair did not comment on the American order as he signed a book of condolences for the victims of the worst attack in Great Britain since World War II.

The families of those missing since the terrorist bombings, meanwhile, were enduring an agonizing wait Tuesday for word of the fate of their loved ones.

"I need to know, I want to protect him," said Marie Fatayi-Williams, who arrived from Nigeria to find out what happened to her immigrant son Anthony, 26. "How many tears shall we cry? How many mothers' hearts must be maimed? My heart is maimed at this moment."

The family of Michael Matsushita, a New Yorker who moved abroad in the spring of 2001, said it was likely he was dead. The 37-year-old left home Thursday to go to work and never returned.

"At this time, we've been told that there is virtually no possibility that he is alive," said David Golovner, a spokesman for Matsushita's family. "We realize the police wouldn't have told us that unless they were certain. We have given up, basically, any sort of extravagant theories about how he might still be alive."

The first of the dead was identified as Susan Levy, 53, of Hertfordshire outside London. Forensics experts have warned it could take days or weeks to put names to the bodies, many of which were blown apart and would have to be identified through dental records or DNA analysis.

Metropolitan Police Commissioner Sir Ian Blair said forensic experts were scouring every centimeter of the tunnel where a bomb exploded on board a Piccadilly line train, the deadliest of the four blasts. Police said they are also scrutinizing 2,500 closed-circuit television tapes taken from cameras around the explosion sites.

"This is the biggest crime scene in England's history," Ian Blair said, warning that the death toll would rise. "They still have to get underneath the carriages, and it is possible they will find more" bodies.