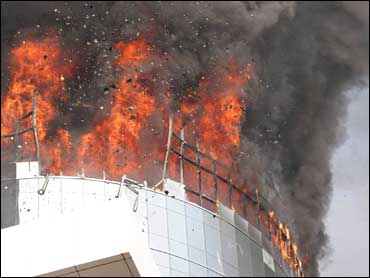 A helicopter plucked survivors from the roof of Bangladesh's biggest shopping mall Friday as a fire raced through the upper levels of the high-rise complex, killing at least seven people and injuring 50 others.

Huge flames shot into the air amid billowing smoke as hundreds of panicked people, many carrying shopping bags, fled Dhaka's 22-story Bashundhara City mall, which has more than 2,000 stores and cafes.

A security guard died at a hospital hours after the blaze broke out on the 18th floor, fire official Selina Chowdhury said.

Firefighters recovered three bodies, all of them men, from an elevator after the fire was brought under control, said Dhaka Metropolitan Police official Mahbubur Rahman.

Firefighter Sheikh Mohammad Shahjalal said that they recovered another three bodies later, but would not provide details.

He said they would continue searching overnight.

Rahman said the blaze was fanned by winds and that firefighters took nearly seven hours to douse the flames.

It was unclear how many people were inside the mall when the fire started, but Rahman said authorities did not expect a large number of deaths. 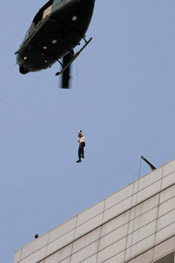 The cause of the fire was not immediately known, but the Ministry of Home Affairs ordered a three-member committee to look into it. Mohammad Faizullah, one of the architects of the building's engineering team, said the complex was equipped with adequate firefighting tools.

Tanjim Ahmed Sohel, state minister of the Ministry of Home Affairs, said efforts to control the fire were initially difficult because the fire department lacked equipment such as ladders capable of reaching the 18th floor.

The floor where the fire began has the offices of the mall's owner, the Bashundhara company, which would normally be closed Friday, part of the weekend in Bangladesh. The mall opened in 2004.