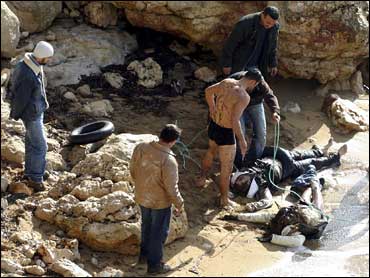 The 50-foot boat sank in rough weather late Saturday off the coast of Seferihisar, a town south of the city of Izmir, local Governor Orhan Sefik Guldibi said. Six migrants were rescued and hospitalized, mostly for shock.

Citing survivors, the Coast Guard said a total of 85 people were on board. Guldibi said 43 bodies, all of them male, had been recovered. Dogan news agency said 51 died.

"We are trying to keep our hopes alive but the possibility of more survivors is diminishing," Guldibi said.

"Boats and helicopters are searching for more migrants in the sea," Guldibi said. "Because of the strong wind, we think the bodies should be closer to the coast than where this boat sank. But they are searching far off the coast as well."

He said it appeared that all the migrants had drowned, though autopsies will be conducted.

The survivors, who stayed afloat by wearing inflated inner tubes around their waists, swam to shore on their own late Sunday and shouted for help, according to Guldibi. Residents heard their shouts and called the police.

The migrants were mostly Palestinians, Somalis and Iraqis, Guldibi said.

The group met up in Izmir Saturday evening and were taken to the coast from where they boarded the boat in the dark. The vessel capsized around 2 hours after setting sail, Guldibi said.

(AP Photo)
Television footage showed a Coast Guard official pulling a body from the sea onto a beach. A boat brought a dozen more bodies, which were placed in black body bags and lined along a dock.

Thousands of immigrants from Asia and Africa enter Turkey illegally on their way to European Union countries in search of jobs and a better life.

Smugglers often take the migrants from the Turkish coast to nearby Greek islands on fragile and overcrowded boats, and such accidents are not uncommon.

The European Union, which Turkey wants to join, is pressing Turkey to crack down on illegal immigration.

EU-member Greece, which has a 8,000-mile coastline dotted with thousands of islands, has accused Turkish authorities of not doing enough to halt the flow of illegal migrants.

Turkey has increased patrols along its Aegean and Mediterranean coastlines, but boats still get through. Smugglers travel at night to reduce the chances of being detected and choose winter months when Turkey's coasts are deserted.