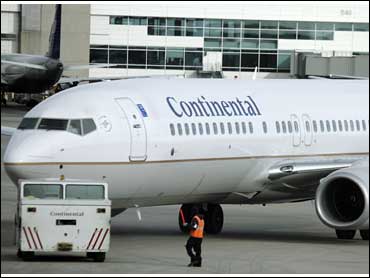 Officials say a plane carrying more than 100 passengers went off the runway during takeoff from Denver International Airport.

The flight was Continental Airlines flight 1404 and was leaving from Denver and heading to Houston. It was carrying 107 passengers and five crew members

The plane veered off course about 2,000 feet from the end of the runway and did not appear to be airborne, Day said. The plane appeared to have slid into a ditch and was on fire after the crash, Corsaro reports.

The FAA did not immediately say why the Boeing 737 ran off the runway, attributing the incident to "unknown circumstances." The weather in Denver was cold but not snowy at the time. Roads to the airport were dry.

The incident took place at around 6:20 p.m. local time.

In November, 1987 Continental flight 1713 crashed in bad weather at Stapleton Airport, the airport in Denver that preceded Denver International. There were 73 passengers on board and 28 died, KCNC reported.